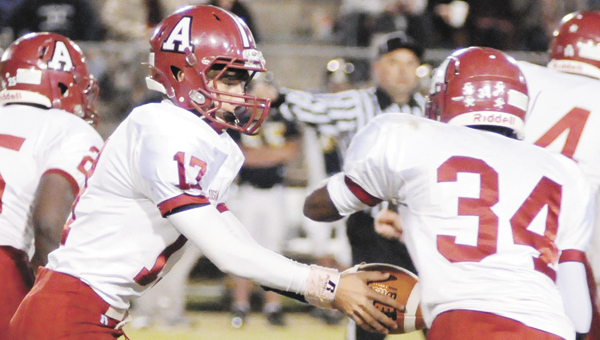 History will be in the making tonight as the Andalusia Bulldogs and Opp Bobcats hold their 68th meeting of all time at Channel-Lee Stadium in Opp.

Andalusia and Opp have been in a heated rivalry since the match up began in 1941.

The Bulldogs and Bobcats have a 33-31-3 record between the two, with AHS holding the two-win edge over Opp.

AHS head football coach Brian Seymore said leading up to tonight’s game, he along with the rest of the coaching staff, has been preaching the same thing since week one this season.

“It’s focus,” Seymore said. “Let’s focus on the task at hand. So much has been said on the Internet and on Facebook. It comes down to the bottom line, which is the game is going to be played on Friday night, 7 o’clock at Channel-Lee Stadium in Opp. We’ve got to be focused when the (ball) is kicked off.”

For OHS head football coach Jack Whigham, ending this season on a positive note is one thing that’s been stressed to the players this week.

“When we get done (tonight), win or lose, we need to feel better about ourselves than last Friday,” Whigham said about his team’s 25-16 loss to Slocomb. “We lost a game last Friday we felt like we should’ve won. We know that everybody thinks that we’re the under dog in this game, and that’s quite all right.

“We should be the under dog facing an undefeated team (like Andalusia, who is 9-0),” he said. “Right now, the playoffs are not on our mind, this is our biggest rival. We need to approach it that way.”

A couple weeks ago, Andalusia and Opp won their region titles and earned the right to host the first round of the state playoffs.

Opp’s Myeke Boyd rushes for a gain during the Straughn game. | Andrew Garner/Star-News

Tonight’s game is a significant contest for the Bulldogs, because if they win, Andalusia will have an undefeated regular season — a feat that hasn’t been done since 1977. In 1977, Andalusia went on to win the state championship.

“A lot of people have made me aware of that,” Seymore said. “Not only is it a rival game against Opp, it’s an opportunity to finish the regular season undefeated. It would definitely be a great accomplishment for our program, for our kids and this community. They’re very excited about the opportunity we’ve got in front of us.”

Additionally, Andalusia’s last road loss came against the Bobcats in 2009 in the first round of the Class 4A state playoffs, a memory Seymore said many of his players haven’t forgot.

“A lot of these seniors played in that game,” he said. “They want to keep the momentum going. This is their time to shine, and it’s their year. People down the road, they’ll remember this group. It can definitely be a huge momentum (going into the post season). You definitely want to win the game.”

The only team standing in Andalusia’s way to get an undefeated regular season is Opp, but Whigham said the team needs to focus on the fact that it is playing their rival.

“They probably have the best team they’ve had since then (1977),” Whigham said. “(Former AHS) Coach (Tom) Causey had several fine teams, but I think overall, this team is better than they were. They have a tremendous amount of speed, and their linemen are playing really, really well. As a high school coach, that always concerns me.”

Whigham said he’s aware of Andalusia’s running game, and spreading the ball to different players on the team.

Seymore said if his team can win the “one-on-one” match ups, then they’ll have a good opportunity to get a victory tonight.

“I just think coach Whigham and his coaching staff does a tremendous job with those kids, preparing them week in and week out,” Seymore said. “They’re very disciplined, they play it by the book and they do the right things. When it’s against Opp, a well-coached team, you’re going to have to earn what you’re going to get offensively.

“Defensively, we’ve got to be very, very sharp in techniques and fundamentals,” he said. “In the end, one team has got to win.”

Injury update: It is doubtful Andalusia center Quincy Thomas will play in tonight’s game, Seymore said. If not, Tyler Raines will be at center, and Catlin Jones will be at right guard.