Salter is employee of year

Shelby Salter is a young woman who loves her job. 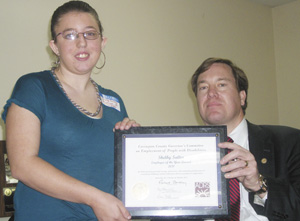 On Thursday, she, along with others, was honored for their commitments to the employment of those with disabilities in honor of National Disabilities Employment Month. The group gathered at the Shaw Recreation Center for the county’s annual committee banquet.

Guest speaker was Graham Sisson, assistant state attorney general and executive director of the Governor’s Office on Disability. Sisson, who is paralyzed from the waist down, spoke of how, at 17, the car he was riding in was struck by a drunk driver.

“I was in the wrong place at the wrong time,” Sisson said. “A drunk driver, fleeing from the police, rounded a corner and hit us head on. I was in the back seat. It broke my back and put me in a coma for

three and half weeks.”

Sisson said he’s seen a lot of changes in the 30 years he’s been disabled.

He said there are two common myths about employing the disabled.

“One that the employee will be absent a lot because of their disability,” he said. “There’s no statistics to support that. And secondly, that they don’t have the necessary skills, but we know with training and education, anything is possible. I have a bachelor’s degree, a law degree, and now, I’m working on my PhD. And anyone can learn a skill.

“All it takes is the willingness for someone to give them a try,” he said.

Case in point was this year’s employee of the year – Shelby Salter, a three-year employee of Cost Plus in Andalusia.

“I like stocking,” Salter, a 2009 Red Level High School graduate, said. “I like making it (the store) look nice for people.”

Sheena, her mother, said her daughter takes pride in her job.

“She tells everyone she loves her job,” she said. “You don’t hear many people say that.”

This year’s educator of the year was Jane Barr, special education teacher at Andalusia High School.

“(Barr) is a true advocate for her students and always encourages them to do their best,” said Kathy Wyatt of the Alabama Department of Rehabilitative Services.

The partnership of the year award went to Ronda Ricks and the Youth Enrichment Services for Covington County, or YES program.

Krudrop is the vice president of LBW Community College and director of the college’s Greenville campus. His resume boasts a number of achievements including the 2009 Hoyt Webb Award by Camp ASCCA (Alabama Special Camp for Children and Adults) for his contributions to people with disabilities.

As the technology world is ever-changing, parents are using new portable devices to their advantage to comfort their children whether... read more