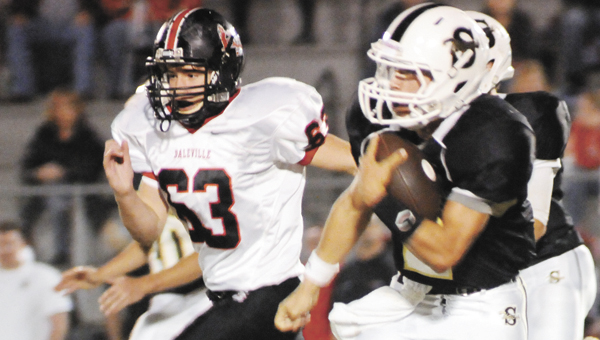 Straughn’s 11 seniors knew that a loss wasn’t an option on Thursday night.

The Tigers ran away with a 41-27 victory over Daleville on senior night to close out the regular season at SHS.

“Let’s be real honest. When we started this year — those that knew football — would not have given this team an opportunity to win six ball games,” SHS head football coach Trent Taylor said. “They would tell you that there were two more they should’ve had.”

With this victory, Straughn finishes the regular season 6-4 overall, and 3-4 in Class 4A, Region 2. The Tigers will travel to face No. 3 Dadeville next week in the first round of the playoffs.

Turvin said the keys to his performance were the coaches and the offensive line.

“They cleared holes all night long,” Turvin said. “That’s about it. Our line did awesome.”

Straughn got on board first with 7:40 in the first quarter on an 11-yard rush from junior Chase Short. The point after touchdown was good and the Tigers were up 7-0.

Daleville’s Brandon Burks, a Troy commit, led the Warhawks with 210 yards on 28 carries and scored three touchdowns. Burks’ first touchdown tied the game at 7-all with 4:44 in the first quarter from 38 yards.

The Tigers answered on their second offensive possession a 76-yard touchdown rush from Turvin, and Straughn led 13-7.

SHS got the ball back on the ensuing kick off on a fumble with 4:09 left in the first.

On the first play from scrimmage for the second time Thursday evening, the Tigers added another touchdown when sophomore Devin Scott hit pay dirt from 46 yards with 3:55 left in the first quarter. Turvin rushed from three yards for the 2-point conversion and the Tigers went up 21-7.

SHS got the ball back on Daleville’s next offensive possession when Keith Edgar caught the pass that bounced off the Warhawks’ Kham Stewart.

Nothing came of Straughn’s next possession, and the first quarter ended.

Daleville added another score when Burks scored his second touchdown from 11 yards with 7:37 left in the first half.

From the start of the second half, the Tigers let the Warhawks know who was in control.

On Straughn’s first offensive possession, Turvin scored his second touchdown from 2 yards out, and the Tigers took a 28-14 lead.

Straughn senior Gage McCart nabbed an interception from Daleville’s Richard Jones, and the Tigers took a 34-14 lead when junior Nigel Byrd rushed in from 37 yards with 7:59 left in the third quarter.

Daleville had another turnover on the next kick off and from there, Straughn added another seven on a 71-yard dash from Byrd.

Burks scored his last touchdown from 61 yards with 10:03 remaining in the contest, and Daleville’s Roytavius Doster had a pick-six from 91 yards with 4:43 on the clock.

Taylor said the players are going into next week with the right mind set after finishing the season with two wins in a row.

“For those seniors, last week was huge and we’re going into the playoffs with the right attitude,” he said. “We’re going to Dadeville to play our hearts out and try to come away victorious, but at the same time, I’m very, very proud of what this bunch has accomplished.”

Tigers in it to win it

Straughn’s Zack Turvin makes a pass under pressure during the Headland game on Oct. 14. | Andrew Garner/Star-News Straughn will... read more