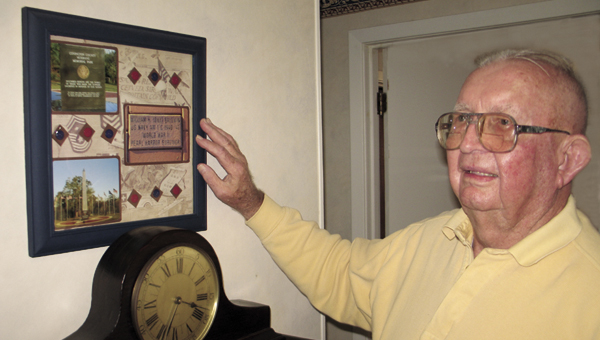 Editor’s note: This story was first published in The Star-News as a Veterans Day feature in 2007. It was reposted here today in memory of Judge Baldwin, who died on Fri., Oct. 28, 2011

Retired circuit court judge William H. Baldwin said that the United States knew that war was coming before the bombs started falling on Pearl Harbor Dec. 7, 1941. However, he and the rest of the men serving with him were unprepared when the Japanese turned apprehension into reality and altered the destiny of a generation of young men.

A porterhouse steak with mushrooms cost a dollar at the Black Cat Café, a Coke was a nickel with a meal, and young soldiers like Baldwin earned $21 per month as metalsmiths in the Navy. They were more concerned with completing their assigned duties and having a chance at a regular income, something difficult to find back home at the time, than possibly dying in the service of their country.

“Popular movies like ‘Pearl Harbor’ overly dramatized things in my opinion,” he said. “But, they illustrated two things very effectively. First, the country was caught completely by surprise, and second, the military was totally unprepared to meet an attack on our soil.”

Baldwin, an apprentice seaman in the Navy at the time, was stationed on the newly commissioned Naval airbase at Kaneohe Bay, Hawaii.

“There were about 1,000 men stationed there and we had 36 aircraft on the field,” he said. “I remember it was a payday weekend. We were divided into four duty sections and three of them were on liberty. I just happened to be in the group on duty and assigned to the fire station when the attack came.”

Baldwin said he has a vivid memory of walking back from the mess hall and hearing a friend remark on some planes that were coming in opposite of the normal traffic pattern over the island.

“He pointed at the planes and said they must be some green pilots from one of the carriers because they were coming in where the outbound air traffic would normally go,” he said. “When they got a little closer, we noticed the red markings and knew they were Zeroes before they opened up and started strafing the planes on the field.”

He doesn’t feel that his reactions or those of his companions were anything to set them apart from other men.

“We each had a job to do and we did it as best we could,” he said. “We were caught by surprise, but we did our duty and did our jobs.”

Baldwin’s job that day was to put out fires so he and his companions were on a fire truck heading down the runway toward the burning planes at the other end.

“We were going down the road one way and all of a sudden, there was a plane coming up the road the opposite direction firing at us,” he said. “The bullets put our truck out of commission, but we made it through and jumped out and headed back for another truck.”

The men at the station had no way to protect themselves from attack other than the armament on the planes that they serviced.

“As we were headed back to the fire station, I remember seeing the officer of the day outside the administration shack shooting up at the planes with a Browning automatic,” he said. “One of the guys we called Wendy had set up ordinance from a plane on a rack we used when we were cleaning the guns and he was firing up at the planes.

We always teased him, giving him credit for the one enemy plane that went down.”

When it was all over, 33 of the 36 planes had been destroyed. Of the two that survived, only one was out on patrol and it was looking in the wrong direction to see the Japanese coming.

“We were lucky because we only lost 15 or 16 men,” he said. “Before the attack, I remember coming back from Pearl one day after a supply run. The Chief stopped at the top of a hill looking down at the base and said it looked like a shooting gallery down there.

“He was right, that’s what it was with everything lined up and the terrain like it was,” he said. “Commander Martin had told us in the inspection the day before the attack that we were as ready for war as we could be. We were caught by surprise and we were lucky.”

Once the attack was over and clean up began, nerves were still stretched tight on the island.

“There were rumors telling that the Japanese were coming ashore anywhere there was room to beach an outrigger,” he said. “Even worse, there was a rumor that they were sending paratroopers in wearing dungarees so command had us working on airplanes wearing our whites.”

Baldwin said he never really kept up with the people he served with when he came home after the war.

“I went to a few reunions and would run into someone I knew every now and then,” he said. “I’m a member of the Veterans of Foreign Wars, the American Legion and the Survivors of Pearl Harbor but there are fewer of us all the time.

“When I got home, I was grateful to be able to take advantage of the G.I. Bill to go to law school,” he said. “I feel that we were treated well for what we did in the war even though there were a few ‘professional veterans’ who wanted everything handed to them.”

When asked his opinion on how America ended the war, he replied, “When the war ended, I was servicing hospital planes at Los Negros Island,” he said. “Anyone who had seen a load of shot-up men coming through that base would not have questioned using any weapon we had at our disposal to end that war.

“Even though so many were killed by the atom bombs, I believe more lives were saved by bringing the war to an end.”