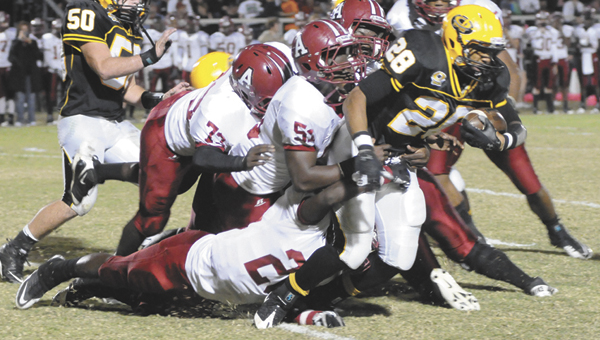 Andalusia outscored county rival Opp 15-13 in the second half, and the seventh-ranked Bulldogs rolled to a 21-13 victory over the Bobcats on Friday night at Channel-Lee Stadium.

The Bulldogs took a 6-0 lead at half time, and faced some “adversity” during the second half when the Bobcats returned a kick 77 yards for a score.

“I think they just kept fighting,” AHS head football coach Brian Seymore said about the second half. “We had to play through a little adversity with a lot of calls (against us), and a lot things that didn’t go our way. That’s football.”

However, Seymore said he really liked how the players handled themselves given the environment.

“I really liked the character we showed in the second half,” he said. “Opp always poses a big threat to us. (OHS head football) Coach (Jack) Whigham and his staff do a good job preparing for us.”

With this victory, Andalusia finishes its regular season with a perfect 10-0 record. This is the first time the Bulldogs have accomplished that feat since the 1977 season, also the last time Andalusia won the state title.

Whigham said despite the loss, he couldn’t be more proud of his players.

The Bulldogs and Bobcats went tooth-and-nail in the first quarter, not allowing a point on the board. Opp had three three-and-outs compared to Andalusia’s one.

AHS got on board early in the second quarter on a 1-yard touchdown rush by senior tail back Jacard Townsend, who finished with 91 yards on 10 carries. The 2-point conversion failed, and the Bulldogs held a 6-0 lead going into half time.

Opp answered at the start of the second half when senior ­Thomas Weed returned the kick off 77 yards for a touchdown. With the extra point, the Bobcats would take their first and only lead of the contest, which was also senior night for OHS.

Andalusia senior quarterback C.P. Rogers took care of the rest of the scoring for the Bulldogs.

Completing a 72-yard, 12-play drive and with the help of an 11-yard reception by David Mahaffey, Rogers snuck the ball in with 36.5 seconds left in the third quarter. With Townsend’s 2-point completion, Andalusia led 14-7.

The Bulldogs didn’t let up after taking a 7-point lead.

Townsend was given the go-ahead for a blitz, and sacked Opp quarterback T.J. Register for a 12-yard loss.

The sack set up Rogers’ second touchdown, which came with 8:28 left in the fourth quarter.

The Bulldogs slimmed three minutes off the clock, and Rogers completed a 53-yard drive on a 6-yard touchdown rush for six. The extra point was good by Hopkins and the Bulldogs took a 21-7 lead.

“We knew on film they were going to get after it,” Rogers said. “They’re (Opp) not a bad team. They’re good, too.”

With pressure from Andalusia’s Will Harrison, Opp’s T.J. Register then threw a pass into the waiting arms of Lakelyus “Fathead” Adams, and the Bulldogs, who were plagued with penalties, turned the ball over on downs.

That was evident when Adams almost had his second interception of the night, but the play was called off when the officials called the Bulldogs for pass interference and block in the back.

Register would make up for his little mistake earlier on the interception to connect with Weed on a 30-yard touchdown pass with 1:28 left in the ball game. The PAT was no good, and Opp cut into Andalusia lead 21-13.

The ensuing onside kick went straight into the arms of Townsend, and two penalties that were off-set put the ball on the Andalusia 45-yard line.

Rogers took three snaps, kneed the ball and the Bulldogs got the win.

Townsend said he couldn’t have done what he did without the offensive line.

“It was real big,” he said about the win. “We couldn’t let Opp beat us. I couldn’t do it without my blocking. I just followed my blockers.

Seymore said the win last night was a great one for Andalusia.

“I’m extremely proud of our kids and our coaches,” he said. “It’s great for our community, and we just want to grow off of this win.”