This year’s pecans are cash crop 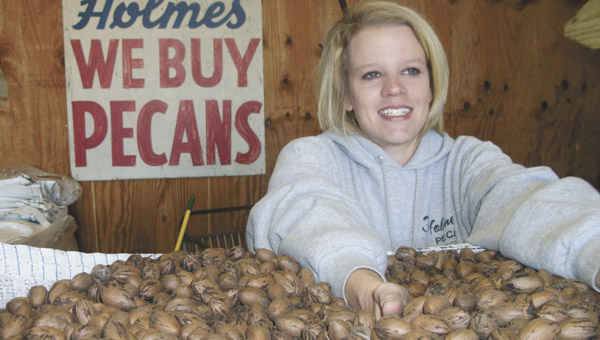 Ashley Morgan of Holmes Pecans stands behind a more than 5-foot tall bag filled with pecans.

For both buyers and sellers at Homes Pecan Company, the pecans running through the sorter Tuesday sounded something like quarters falling from a slot machine.

The previous afternoon, the line of sellers wrapped around the building on E. Watson Street. Some were looking to either sell or have shelled 5-gallon buckets and burlap feed sacks full of varieties from Stewarts and Elliots to seedlings.

“We’re buying it all,” said Ashley Holmes Morgan. “They’ve said thus far, this isn’t a bumper crop, but I beg to differ – at least here in Covington County – and that’s good news all the way around. People get money for selling their pecans and the city because it puts money back into the economy.

“2007 was a big year for pecans,” she said. “So far, when you compare now this year to the same time last year, this year is worse, but in a good way. There are people everywhere with pecans. (Monday) I started at 7:30 a.m. and didn’t get to go home until after 10 p.m. That’s how busy we’ve been.”

Morgan said per pound, prices paid can average up to $1.50 or more, depending on quality.

A sample from each bag is tested. The pecans are cracked to gauge the quality of the meat.

“We look at the color of the meat, how it’s filled out on the ends, if it has bug sticks, if it’s dried or shriveled,” Morgan said. “If it looks good, is full, you’ll get a good price.”

But don’t think about slipping in last year’s crop, she said.

And it seems that Americans aren’t the only people nuts about pecans – an increasing demand in China for the Southern delicacy is driving prices up.

The once-mighty walnut has begun to take a back seat to the pecan in China, which in less than four years went from buying less than 1 percent of U.S. pecan crops in 2005 to 28 percent in 2009, according to Wall Street Journal reports. Consequently, prices for shelled pecans nearly doubled between 2007 and 2010.

The price for in-shell pecans was usually $1 to $1.20 per pound and now is $3 per pound, mainly due to demand from China.

It’s those prices that are pulling in residents from all over southeast Alabama. Morgan said customers from as far away as Paxton, Fla., Castleberry and Brooklyn – and even Birmingham – bring their wares to Andalusia.

Only 12 school system employees throughout Covington County will retire Dec. 1 because of changes in the state insurance program... read more