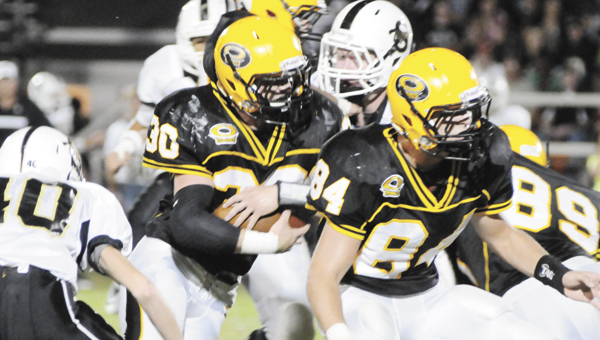 A new season will begin for the Opp Bobcats this Friday night, and the only team standing in their way are the Walter Wellborn Panthers.

In just more than 24 hours, the Bobcats will play host to the Panthers in the first round of the Class 3A state playoffs.

“They look very disciplined,” Whigham said. “They run a Wing-T, and they run a bunch of different formations.

The Panthers enter tomorrow night’s contest with heavy hearts because one of their players — Aaron “Tootie” Harris — died Tuesday of apparent kidney failure at UAB hospital in Birmingham.

Before the game tomorrow night, Whigham said there will be a few minutes set aside to honor Harris. Additionally, Harris’ jersey number (79) will be painted on the field in his memory.

“I can’t imagine what they’re going through,” Whigham said. “It puts football in perspective a little bit.”

The Panthers (7-3) are entering the playoffs for the third time in as many years under head football coach Jeff Smith. Smith is a Wellborn alumnus, and left Class 5A Hueytown to return to his alma mater, which was 1-9 the season before his arrival.

Offensively, the Panthers rely on running backs Chantz Goodman and Kevin Mixon. Both have had to fill the void left by standout Delrickus Rhoden, who graduated last year.

On the defensive side of the ball, the Panthers are led by senior linebacker Bobby White, Screws, a defensive back and Traylor, a defensive lineman.

Whigham said he’ll be relying on his defense to play a good game, and added that “we’ve got to score some points, too.”

“I feel like we can score some points,” he said. “We’ve got to try and be more balanced with what we do.”

Last week, the Bobcats fell to rival and sixth-ranked Andalusia 21-13. Opp held the Bulldogs to only six points in the first half alone and scored 13 on a kick off return and a touchdown reception.

“We threw the ball the other night for a higher percentage of the plays than we normally do, but we’ve got to complete a few more passes and make more catches,” Whigham said. “I’ve got to make sure the things that we do throw, that we can protect it.”

The last time Opp was in the playoffs was in 2009, while a Class 4A school. Opp beat Andalusia in the first round, and the team’s juniors and seniors were freshmen and sophomores then.

Whigham said the playoffs can be considered “new territory” for the upperclassmen.”

Right now, the attitude of the team coming off last week’s loss is positive, Whigham said.

“We talked all last week coming out of the Andalusia game, win or lose, that we need to feel better about ourselves, and we did,” he said. “They knew they played a really good football team to the wire. We’re sitting here 6-4, but two of those losses were against 10-0 teams.

Kick off in Opp on Friday night is at 7.