Bulldogs ready for 1st round victory 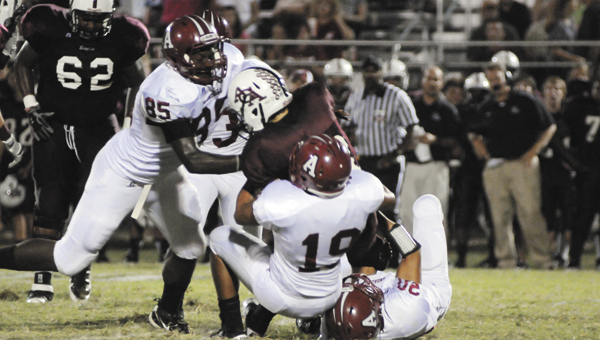 The pre-game warm ups are done; players are suited up and ready to go.

But, there’s one more thing that must be done before taking the field — the pre-game pep talk.

Andalusia head coach Brian Seymore said he will tell his players to relax and enjoy the moment, while at the same time, remain focused tonight as the sixth-ranked, undefeated Bulldogs take on Elmore County in the first round of the Class 4A state playoffs.

“I want our kids to go out there and relax and play the game they know how to play,” he said.

Andalusia enters tonight’s contest 0-2 in first-round playoff appearances. The last time the Bulldogs made it past the first round was in 2007. The Bulldogs lost to Opp in 2009 when the Bobcats were a Class 4A school, and then lost to Escambia County last year.

Seymore said it’s all about doing the “little things” right.

“It comes down to execution on offense and defense and doing the little things right — blocking and tackling — the fundamentals of the game,” he said.

This year, Andalusia is riding a regular season 10-0 record, the first undefeated season since 1977.

Offensively for Elmore County, quarterback Truman Franklin, a three-year starter, is completing 64 percent of his passes for 1,556 yards and 18 touchdowns to lead what Seymore said is an “explosive” offense. He’s had nine interceptions this season.

“He’s an explosive back and can make plays in spaces,” Seymore said. “That’s what people do in a spread offense. We’ve got to counteract that by being fundametnally sound and getting in the right spots.”

Seymore said the big key on defense this week is to try and make sure Elmore County moves to a one-dimensional offense.

“Once we do that, we’ll try to get after the quarterback on the passing game,” he said.

On offense, Seymore said Andalusia will continue to utilize its running game, and will be focused on gaining control of the clock.

In the end though, Seymore said the team’s main goal is to be able to strap the pads on again next week and be able to have another pre-game pep talk.

“Definitely, we want to win,” he said. “This is a game we want to win and move on to the next round. That’s our ultimate goal is to be playing next Friday.”

Kick off in Andalusia is at 7 tonight.