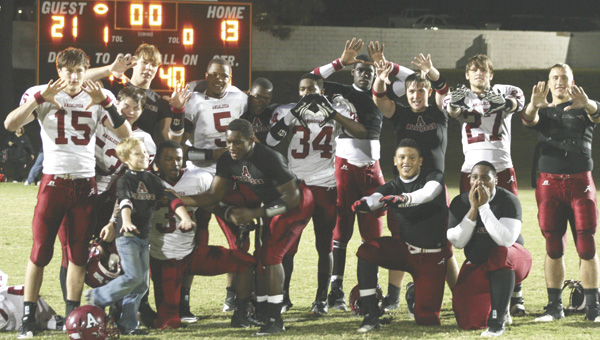 Andalusia’s seniors are on the verge of doing something great, something that isn’t new to them.

The Bulldog seniors will take the field tonight for the first round of the Class 4A state playoffs against Elmore County, and will try to lead Andalusia to a second- round berth.

For many of these seniors, playing football isn’t something they picked up a few years ago.

Ellison said he could tell this group of seniors was destined to do something great.

“When they were kids, they were hard at it,” Ellison said. “They went at it real hard, Jacard (Townsend) and C.P. (Rogers) especially.”

These seniors have been with current head football coach Brian Seymore since they were freshman at AHS, when he came to the program in 2008.

“This is a very special group,” Seymore said earlier this week at a Rotary Club meeting. “They mean a lot to me because they’ve seen the good of the program, and they’ve seen the bad because of the trials and adversity. They understand how important it is to go out there every year and prove something and try to accomplish our goals.”

“I had a bad headache,” Raines said. “It still excites me to this day.”

For Niguel Jones, getting his first touchdown was his earliest memory of the sport he loves.

Jones, like most of these seniors, started out in the tiny mite league. He said he stayed with the sport because he realized he got better at it as the years went along.

“I’ve loved being with the same teammates every year,” Jones said. “It became a sport I really care for.”

Catlin Jones, who is one of Andalusia’s defensive leaders, said his father, Casey, was his coach through his PeeWee years.

“He told us to stay together and that we would be great,” Catlin said.

In Ellison’s last year as these seniors’ coach on the PeeWee team, the Bulldogs finished runner up in the Super Bowl.

“Every one of them I have been real proud of because they have exceeded expectations,” he said. “I wish them luck, and not just for (today), but for their entire future.”

Looking back at ’70s wins

Lex Short makes a pass during his days as an Andalusia Bulldogs quarterback. | Courtesy photo If Lex Short could... read more