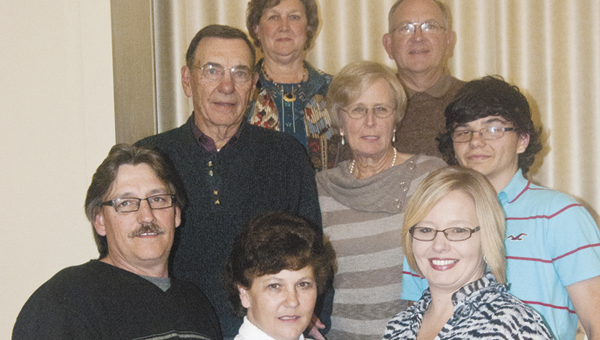 Rocky Farms, owned by Truett and Jean Maddox, was named the group’s “Farm of the Year.”

Truett Maddox was born in 1935 in Covington County and grew up working in the fields, where his family raised corn, cotton, peanuts, cattle and hogs. After school and in summers, it was part of his responsibility to weed the fields and tend to the milk cows.

He graduated from Covington County High School, where he was a member of FFA for three years. After graduation, he served in the Army during the Korean Conflict.

After the war, he attended Samford University and the University of Alabama.

He spent 44 years in the cookie business, with 22 years at Bremner Biscuit Company and 22 years at Greg’s Cookie Company in Birmingham.

Having grown up around cows, he knew he wanted to get back in the business. He purchased his first bull and five heifers in 1985. He now has an Angus bull and his cows are Angus, Simmental and Limousine mix.

Mrs. Maddox is certainly a partner in the business, where she too has “done it all,” from building and repairing fences to raking hay and feeding cattle.

Truett and Jean Maddox have been married for 42 years and have five children, Lynn Purvis, David Maddox, Chuck Maddox, Beverly Wyatt and the late Steve Maddox. They have 11 grandchildren and three great-grandchildren.