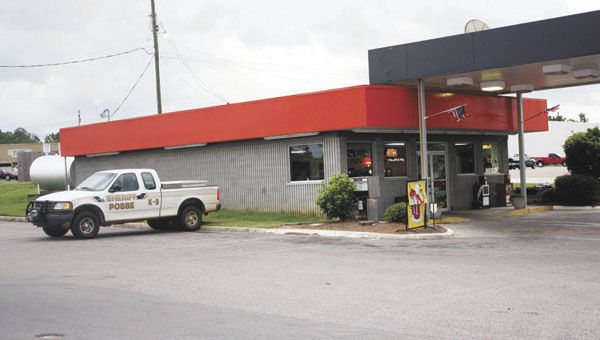 Shown is the Super C, where Jermaine Mount sought help the day he was shot. | File photo

District Judge Trippy McGuire denied bond for two men charged with capital murder in the August death of an Opp man, and bound their case over to the grand jury.

Carlton Hunter Brooks, 19, of Kinston, and Marquez Deundra Hinton, 21, of Opp, are each charged with capital murder in the death of Michael Jermaine Mount, 27, of Opp.

Opp Police Department Investigator Mark Kyzar testified that the investigation has shown that the shooting incident took place just off of Kellum and Brundidge Streets. The victim was in a vehicle at the time, and drove to the nearby Super C Convenience store and went inside to seek help. He collapsed there, and was pronounced dead at Mizell Memorial Hospital.

Kyzar testified that there had been an exchange the previous night when Hinton shot Mount’s vehicle with a pellet gun.

He also testified that on the day of Mount’s death, the investigation shows, Hinton and Brooks were walking together toward Pizza Hut, where Hinton worked, when they encountered Mount in a vehicle. Some witnesses, he said, indicated that Mount was driving on the sidewalk where the two defendants were walking in an attempt to hit them.

Brooks told investigators that he jumped to move away from the car, fired, and hit Mount.

An accused murderer, out of jail for the last three weeks seeking medical treatment, is set to ask a judge... read more