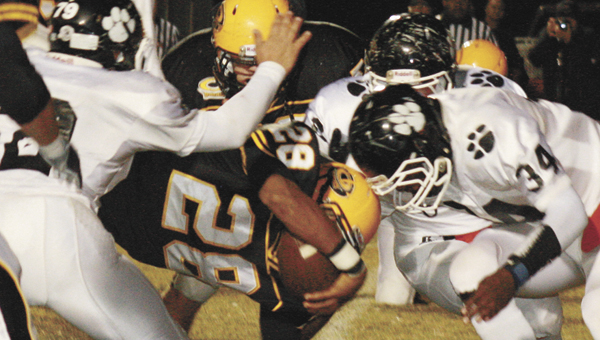 The sign on the visitor’s side of Opp’s Channel-Lee Stadium said it all, “Win it for Tootie,” and that’s just what the Walter Wellborn Panthers did – 42-13 – in the first round of the Class 3A state playoffs Friday.

Wellborn’s Aaron Harris, or “Tootie” as he was known to family and friends, died from apparent kidney failure Tuesday. To honor their opponent’s fallen team member, Opp not only held a moment of silence in Harris’ honor, but also painted his No. 79 jersey number in the center of the field.

And as the game progressed, Harris was surely smiling down from Heaven as he watched the Panthers physically outmaneuver and out-play the Bobcats.

Opp was first on the scoreboard with 2:51 left in the first quarter with a touchdown by Myeke’ Boyd and a successful point-after-attempt. But when the Panthers quickly fired back, placing their own seven points on the scoreboard, Opp Coach Jack Whigham said he knew a turning point in the ballgame was about to occur. He was right, because one minute later, an Opp pass was intercepted for another Panther touchdown with 9:35 left in the half.

“Right then, that was the defining moment for me – when they pushed ahead of us,” Whigham said. “When you have players (like the Panthers) who come out with so much energy, so much emotion, those are your tough opponents.

“They just out played us,” he said. “We physically got whipped. They were playing for a high cause, and it showed. Period.”

The Bobcats rallied with five seconds left in the second quarter when, with 50 seconds on the clock, a Panther touchdown and t2-point conversion brought the score to 21-7. The subsequent Panther kick-off bounced out of bounds at the Opp 35-yard line, putting the Bobcats within scoring range. The Bobcats quickly made it down field with a pass, first to Russell Moseley, was good for a first down; then, a screen around the right to Devin Davis, which put the Bobcats on the 5-yard line. With double zeros about to click on the clock, a pass to Trent Finedore completed in the end zone for Opp’s last score of the night, and the half ended at 21-13.

During the second half, nothing went right for the Bobcats. As the game progressed, so did the Panther’s zeal for making it to the second round of playoffs and their ability to get on the scoreboard.

At one point, the Panther team’s enthusiasm for the game caused referees to issue a verbal warning about celebratory actions on the field. Still, it wasn’t enough to dampen the team’s mood, and the Panthers went on to score three more times, including a two-point conversion and one PAT, bringing the game’s final score to 42-13.

Whigham said his team played a “quality” team, and his players should be proud of their season.