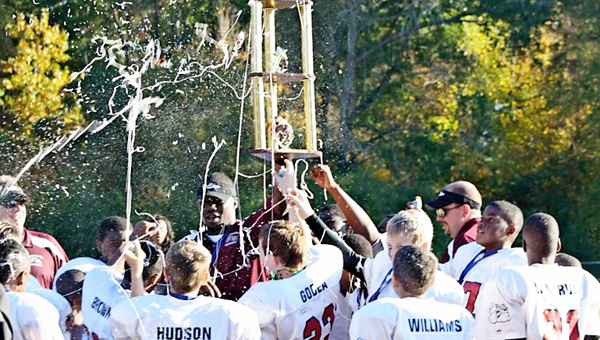 The Bulldogs finished the season with a perfect 10-0 record, and head coach Casey Jones couldn’t have been happier for the win.

“Our defense has been rock solid all season, and (Saturday) was no exception,” Jones said.

The Bulldogs held the Panthers to three first downs, four punts and allowed them one entry into Andalusia’s side of the field.

Will Clark led Andalusia this season with 52 tackles off the defensive line.

William Lindsey had 46 tackles this season and netted nine in the championship game.

The Bulldogs got going early, and on their first play of Saturday’s game, quarterback Grant Holley ran a toss sweep to Jamal Hourel, who took it 60 yards for the touchdown. The extra point was no good.

After a series of punts from both teams, the Bulldogs drove 62 yards and Hourel scored on a quarterback keeper for the 1-yard score. Holley nailed the extra point.

Additionally, the Tiny Mites played in the Super Bowl, but came up short.