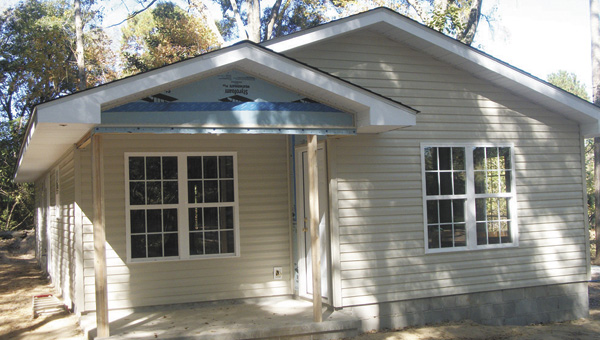 In the space that only two short weeks ago was an empty lot, there now stands a lovely, three bedroom, two-bath vinyl sided home of the Sherrie Stewart family – all thanks to an army of Habitat for Humanity volunteers.

And maybe – just maybe – the home will be move-in ready by Christmas, said Dale Pancake with the local Habitat chapter on Tuesday.

“But, I’m reluctant to make that prediction,” Pancake said. “I know the family wanted to be in by Christmas, but…work progressed nicely during the last two weekends, and I think construction-wise, we can be finished in the next five weeks.

“But then, we have to go through the closing process, which with the holidays, who knows if it will happen in time.”

Pancake said the project is “exactly where we planned to be after four days of work.”

“John Roberts (a volunteer) will be there today and tomorrow finishing the electrical and such,” he said. “All the utilities are running underground, so those have to be tied in. Then, we’ll have to have an inspection by the city. From there, we can move along with insulation in the walls and then the sheetrock.”

But until given clearance by the city, the need for volunteers is at a standstill, he said.

“Until the sheetrock is done, we’ll be calling on people,” he said. “Then, we’ll need a group willing to paint. Don’t worry. No experience is necessary, but it is a plus.”

On Tuesday, a nice cream-colored vinyl sided house was a big change from just last weekend thanks to a team of dedicated volunteers, Pancake said.

“We had an offer and accepted it for a roof from Jerry Qualls roofing,” he said. “Mr. Qualls brought a crew and just put it all on. They spent Friday morning working, and by the time we went to lunch, the roof done. They did a super job.

“At the same time, Covington Metals and Robby Theus sent a crew over and got us lined up and doing starter rows for the vinyl siding,” he aid. “We really appreciate that. We couldn’t have done the siding without that start and guidance.

“And I want to give a shout out ahead of time, a thank you to Shaw Industries who will provide all the floor covering in the house,” he said. “Carpet throughout with the exception of the bathrooms and kitchen, which is vinyl. That’ll be the last thing to go in because we don’t want to mess it up.”

Pancake also expressed his thanks to those who helped feed the volunteers, which included David’s Catfish House, those at Blue Lake Methodist Camp, St. Mary’s Episcopal Church and Billy Joe Stallworth of Andalusia who prepared barbecue on Friday.

“And to the volunteers, of course,” he said. “We couldn’t have gone this far without all of you.”

IN THE GIVING SPIRIT