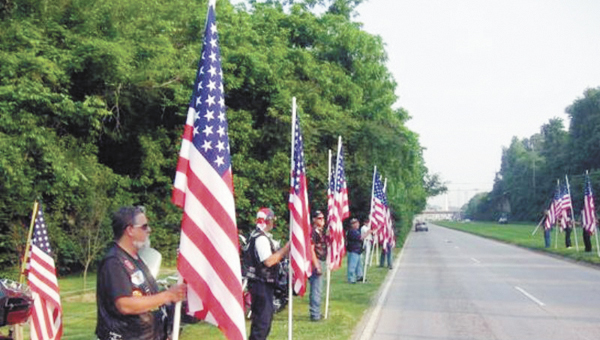 Among the services offered by the Patriot Guard Riders is a flag-salute for veterans’ funerals. | Courtesy photo

Local efforts are under way to bring a nationwide organization that benefits fallen service members’ families in this area.

Larry Clifford of Opp, spoke to the Opp City Council Monday night about the Patriot Guard Riders who provide military honors for families of veterans.

“We do this at the request of the families,” he said. “If families don’t know, they don’t know to ask. We do the military honors for funerals. They’ll call us and we’ll do the whole thing for free.”

Clifford, who is a member of the Wiregrass Chapter, which serves from Enterprise to Georgia, said his goal is to develop a chapter from Opp to Mobile.

• An American flag line at the funeral home or church and the cemetery;

• An escort from the funeral home or church to the cemetery;

• Patriotic people with outstretched flags as shields to stand between any protestors and the mourning family and friends;

• Respect, honor and support for the departed, family and friends.

Clifford said the Patriot Guard has an unwavering respect for the men and women who have served the country as soldiers, police officers and firemen.

“We use motorcycles and support vehicles to provide an honorable escort and flag line at the funeral home or church and cemetery,” he said. “We are there to protect the family. We don’t try to do anything out of the way.”

Clifford said a good number of members are military veterans, as well.

Additionally, Clifford said they are available to deployment ceremonies and coming home ceremonies for deployed troops.

“We escort them to the airport and we do the same thing when they come home,” he said.

The organization operates solely off of donations, he said.

“This is a very noble thing you are doing,” Mayor H.D. Edgar said.

Clifford said he has already visited Andalusia and plans to visit Florala and Brewton in the coming days.

Anyone interested in becoming a part of the new chapter, may contact Clifford at 764-2860 or email him at rockybranch_20002001@yahoo.com.

Hardees of Opp has teamed up with the Opp Chamber of Commerce to make 10 children’s Christmases a little brighter.... read more