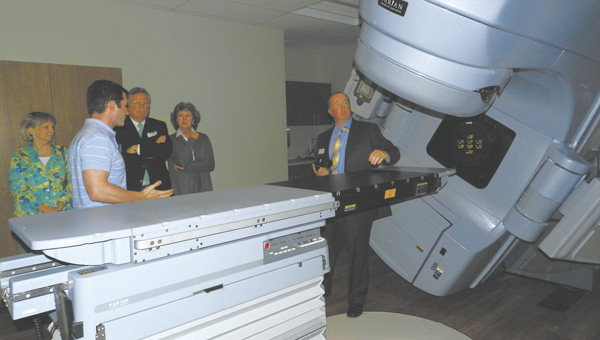 Technicians demonstrate how the linear accelerator in the cancer center adjusts to administer radiation at just the right angle.

Andalusia’s new comprehensive cancer center is administering more than 150 patient treatments a week, officials said yesterday when the opening was celebrated with a ribbon cutting and open house.

The center, a partnership between Andalusia Regional Hospital, 21st Century Oncology and Sacred Heart Cancer Center, opened in August on the hospital campus. Putting that partnership together and getting it open took about three and a half years, ARH CEO Mark Dooley said.

“This center was designed with the patient in mind,” Dooley said.

The center features separate waiting rooms for chemo and radiation patients. There are separate changing areas for men and women in the radiation area, and the facility was done in calming colors.

Dr. Mark Boatwright of Sacred Heart Medical Oncology praised the local staff and said a nurse practitioner has been added so that chemotherapy treatments may be administered five days per week.

“If you think about someone who needed daily treatments, previously, they might have to drive back and forth to Montgomery every day. That’s a 1,200 miles in a month.”

Terri Smith, vice president for cancer services at Sacred Heart, explained that the chemotherapy side of the facility includes exam rooms, a pharmacy for mixing chemo drugs under a hood, and reclining chairs with small televisions for each patient.

Often, she said, patients who receive chemotherapy become friends and enjoy visiting with each other, “especially in a community like this where people know each other.”

There are a host of Veterans Day activities scheduled today and tomorrow. First, area schols will host their respective programs... read more