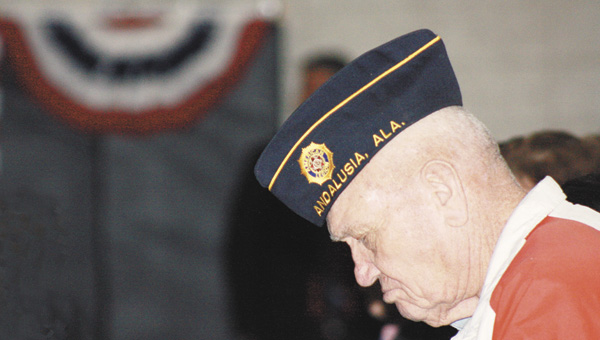 “No soldier, sailor, airman, Marine or first responder takes on the mantle of service to be hurt or killed, but they know it’s likely to happen. That’s what they do. Why? Because that’s what they took an oath to do – protect this country.”

Those were the words given to the crowd at the Andalusia Middle School Veterans Day program Thursday and spoken by Lt. Commander (ret.) Michael F. Brady.

Brady accrued 20 years of military service with the U.S. Navy. A graduate of the U.S. Naval Academy, he was a pilot who later became an expert in anti-submarine warfare, special weapons and survival training. Before his retirement, he flew C-12 and T-39 aircraft for the Naval Air Station in Pensacola, Fla.

He is also the grandfather of Ian Peek, AMS student and SGA vice-president.

Brady was encouraged to speak on the legacy of the U.S. soldier and spoke of a childhood story about his local VFW lodge.

“It was named after a local man who died overseas, then 22 years later his son died in Europe not far from where his father died,” Brady said. “The father never got to see his son. To me, that speaks volumes about legacy.”

Brady also spoke of his father who enlisted in the Army-Air Force shortly after the Japanese bombed Pearl Harbor. He told of how his father was stationed on Tinian, the island from where the two atomic bombs were launched.

“My dad told the story of how one day, the Enola Gay (the famous place that dropped the ‘Little Boy’ bomb on Hiroshima) was parked in one his parking spots on base,” he said. “It was highly classified where he was stationed, and he could never tell my mother where he was. So, he and my mom used to have a code where the first letter of the second paragraph on each letter would spell out his location.

“It wasn’t until after the bomb dropped that we knew how important his mission was,” Brady said. “But my bedtime stories were shaped by life experiences.”

He also described how his brother earned a Silver Star while in Vietnam after, while under heavy enemy fire, he illuminated a landing field so that his fellow soldiers could be rescued.

Which, incidentally, is continued through Brady’s son – Michael, who is also a Navy pilot now serving in the reserves and is a pilot instructor at Whiting Field in Milton, Fla.

“Our veterans are warriors that project and protect our nation,” Brady said. “Nothing should overshadow the service, patriotism and bravery of our veterans today.

Throughout the day’s program, the crowd heard selections from Megan Rabren, a trained vocalist from Knoxville, Tenn., and the AMS advanced band.

Veterans attending were also treated to refreshments after the ceremony.

‘Black Hawk Down’ author to speak at FBC hero event