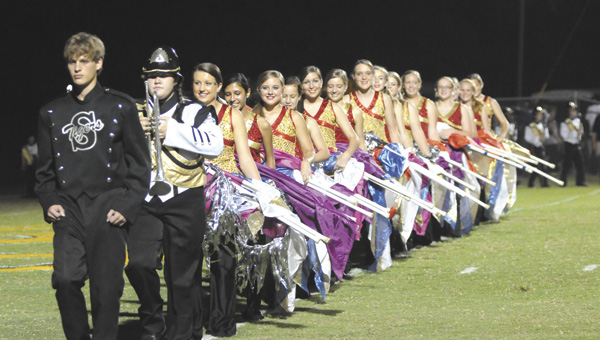 Pleasant Home Principal Craig Nichols made a promise to the Eagles’ football team if they beat St. Jude last week, he would have a band for them this week.

Trailing by a point in overtime, the boys made good on their end of the bargain on a two-point conversion by Gabe Gunter, to defeat the Pirates 15-14.

On Monday, Nichols did his part by securing the Straughn High School band to perform tonight.

“Mr. Nichols came up with the idea,” said Randy McGlaun, PHS assistant principal, said. “It was remarkable win. Several of us discussed it and called Mr. (Shannon) Driver at Straughn. He thought it was a good idea. I’ve talked to several people in this area who thought it was a good idea. We’re the only one left in the county, and we think it’s good spirit to have another school support us.”

SHS band director Wade Caudle said his band is “happy to do it.”

“I felt honored that they wanted our group to perform,” he said. “I thought it was a great thing for our band to do, and it’s great to support another county school since our season is over.”

Caudle said the band would play in the stands and perform an abbreviated halftime show.

“Pleasant Home and our band boosters teamed up to get red shirts,” he said. “I’d like to say ‘thank you’ to Pleasant Home for inviting us. We feel honored, and we’re happy to do it.”

The gesture has done wonders at Pleasant Home, too, McGlaun said.

“Mr. Nichols talked to several seniors, and these boys are really excited,” he said. “They’ve never played on a field when the band was playing for them. A lot of these kids are around each other a lot more than people think. A lot of parents from Straughn have also volunteered to help. They understand what it takes to put on an event like this.

“We hope this will give a little momentum going into Friday night’s game,” he said.

Todd sentenced to life in prison