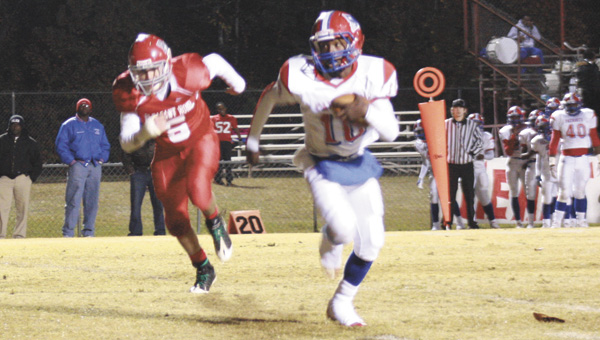 The top-ranked Linden Patriots ended the Pleasant Home Eagles’ historic playoff run Friday night in the second round of the AHSAA 1A playoffs with a 41-0 shut-out.

Pleasant Home had a tough time dealing with the size and speed of the Patriots on both sides of the ball. Pleasant Home head coach Ronnie Douglas said, “This Linden team was really big and fast and they had great game plan for us. We just weren’t able to get guys where we needed to.”

Marques Sheldon got the scoring started for the Patriots on an 11-yard run that was his first of three touchdowns. The short run was set up after Sheldon returned a Pleasant Home punt 35 yards to the Eagles 11-yard line.

Sheldon wasted little time before adding his second touchdown. He picked off a Gabe Gunter pass on the next play from scrimmage and returned it 23 yards for the score, giving the Patriots a 14-0 lead.

After the Patriots defense forced a punt from Pleasant Home offense on the next possession, Sheldon hauled in a 62-yard touchdown catch from Anthony Robinson for his third touchdown of the first quarter, extending the lead to 20-0.

Following a third Pleasant Home punt, the Patriot offense chewed up some clock on an 11-play, 67-yard drive that lasted just over five minutes. Jamaal Lewis punched it in from 8 yards out to the Patriots a 26-0 lead with no minutes left in the first half.

Robinson tacked on another score with his second passing touchdown of the game when he found Terris Lewis all alone in the end zone a fourth-and-six play from the Pleasant Home 24-yard line, increasing the lead to 32-0.

After another Pleasant Home punt, Robinson added his first rushing touchdown and third overall on the night with a 7-yard quarterback scramble.

On the Patriots’ next possession, the Pleasant Home defense forced a second turnover with a fumble, but recovered the ball with their heels up against their own goal line. After two plays of little gain, John Newby found himself unable to get out of his own end zone and was brought down for a safety, giving the Patriots a final score of 41-0.

“ I was proud of what we accomplished this season and our guys fought all the way to the end tonight, the community also showed great support tonight I was very proud of that.”

The Straughn High School band pep played for the Pleasant Home Eagles and received a standing ovation when they came out in Pleasant Home colors.