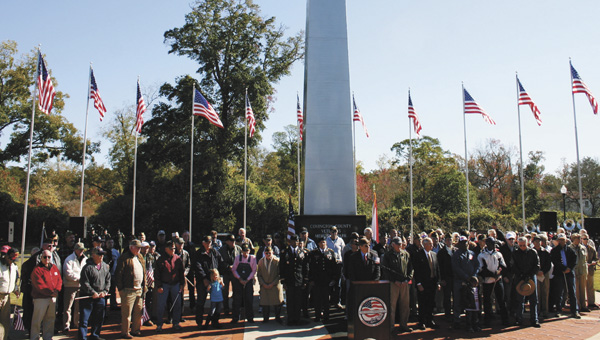 The veterans who filled the floats and risers during Covington County’s Veterans Day events were a perfect indication of the abundance of hometown heroes in Covington County.

The names inscribed on the city’s veterans’ mem-orial were only further proof that the people of this community are willing to pay the ultimate sacrifice for our freedom.

And that was the subject matter – heroes – on which Lt. Col. (Ret.) James D. “Jim” Lawrence spoke.

An Opp native, Lawrence said he grew up on a farm and had no idea his life’s work would be in the military.

“From comfort of our daily lives, it would be easy to ask why do we honor veterans,” he said. “When I thought about it, my point of view is that veterans do unique things for us that aren’t done as a routine matter. Veterans are special because they take risks and perform.

“They put their lives on the line and were, and are, the first line of defense to tyranny,” he said. “They perform valiantly under the worst of circumstances, and that is why they should be honored.”

He talked about heroes in his life – his brother Harry, who served in the Army in the 1950s and his next door neighbor, Fob Ward, who was in the Army in World War II.

Lawrence also spoke of another of his heroes – James Lawrence Noland of Opp. Noland was a veteran of WWII and the Korean Conflict, was born on July 4, 1920, a football coach, teacher, superintendent and later served as mayor of Opp.

Lawrence said on the first day of school as ninth grader, Noland “collared” him in the hall.

“He said since I was his namesake, he expected a lot from me,” he said. “I hope I didn’t disappoint him.”

And by the looks of Lawrence’s impressive military career, it would appear he lived up to the expectation. An Air Force Command pilot with 5,800 hours of flying time in his 27-year career, Lawrence, for many years, was co-holder of the world record for the C-130 non-stop flight time – 29.7 hours set in Nov. 1979 – and 18 of his years were in special operations. In 1980, he participated in the attempted rescue of American hostages held in Iran, and later, he went on to become a military instructor. After his Air Force career, he worked as an inspector and consultant in the environmental field. He and his wife, JoAnn, currently reside in Montgomery.

In conclusion, Lawrence asked that all honor those who have served in the past, as well as those who continue to serve.

“Let’s not forget the valiant men and women who serve in current wars in Iraq and Afghanistan,” he said. “Their sacrifice is magnified as troops return for a second, third, fourth and sometimes fifth tour.

“Our troops today are as good as any we’ve ever had,” he said. “These men and women are in combat on our behalf. It is that very quality, their wilingness to step into the arena and perform under fire that makes veterans so highly valued and deserving of our undying adulation.

“They endure what so many of us cannot or chose not to do, so that the rest of us can enjoy freedom,” he said.