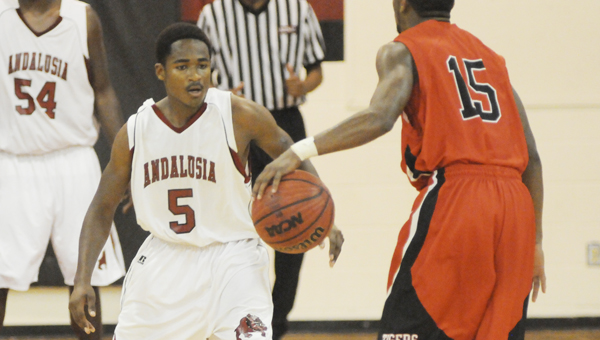 When the game was said and done, finger prints littered the Andalusia basketball goal glass on Monday night, leaving remnants of a game head basketball coach Richard Robertson said the team was fortunate enough to win.

The Bulldogs beat Class 6A Dothan 61-56 in their season-opener, and three Bulldogs finished in double figures.

“We’re going to win one,” Robertson said. “I’m disappointed in some people that I thought would do better, but that’s what you get when you go against yourselves. What we were supposed to do and trying to do was there, and when we did it correctly, we got it.”

The Tigers came out swinging early in the first period, taking a 4-0 lead. Dothan increased that lead to 8-2, but the Bulldogs then went on a 9-0 run taking an 11-8 lead on a Sam Byrd put back. Byrd finished with a double-double, scoring 19 points and 10 rebounds.

Taking control early in the third period, Andalusia jumped to a 43-31 lead with the help of a pass from Jacard Townsend to Byrd to make it 39-31, and then two consecutive steals and lay ups from Niguel Jones and Joe Flowers.

Dothan came back and trailed 43-37 before a late Tigers tres edged Andalusia’s lead to 43-40 at the end of the third period.

Late in the fourth period, Andalusia’s Jayden Ellison scored six quick points for the Bulldogs on three consecutive steals and lay ups with 2:39 left in the game. Ellison’s last steal for points came at the back end of a foul.

Dothan kept the game tight throughout the last two minutes of the game, nailing long shots from the perimeter.

“We’ve got to come in and try to get better in all phases of the game,” Robertson said. “I think they understand from half time how I meant by, ‘we’ve got to score.’ We turned the ball over too many times.

“We have to get ready for Enterprise, and we don’t have but two days to do it before we have to do it,” he said.

The Tigers trailed 58-56 with more than 30 seconds remaining, but didn’t take advantage, losing the ball on an inbounds play and then a missed 3-pointer.

On Andalusia’s next possession, Jones was fouled and made his two shots from the line. Jones had 13 points, and was 4-of-8 in free throws.

Andalusia led 60-56, and Jones later got a steal on an inbounds, and made the second of two free throws to seal the win with 6 seconds left on the clock.

Townsend added 16 points and nine rebounds for the Bulldogs.

Andalusia senior guard Alexis Horton led the Lady Bulldogs with 28 points, and added 10 steals and 10 assists in the win over the Lady Tigers.

Andalusia led early on a 6-0 run in the first, and took an 18-13 lead after the first period. The Lady Bulldogs took a 34-27 lead at half time, and then outscored the Lady Tigers 38-31 in the second half.

“We’ve just got to keep working on putting people away,” AHS girls head basketball coach Bennie Shellhouse said. “We had some unforced errors that we can fix. We’ve got some work to do before we play Enterprise on Thursday.”

Dothan’s Valencia Dunlap led the Lady Tigers with 12 points, and Hannah Winston chipped in 11. Jasmine Crews and Jamya Stallworth had nine points each.

Andalusia’s boys and girls will travel to play Enterprise on Thursday. B-team starts at 4:30 p.m.

Douglas: ‘I thought they did a good job’

Pleasant Home finished 8-4 on the season this year. The Eagles made history, advancing to the second round of the... read more