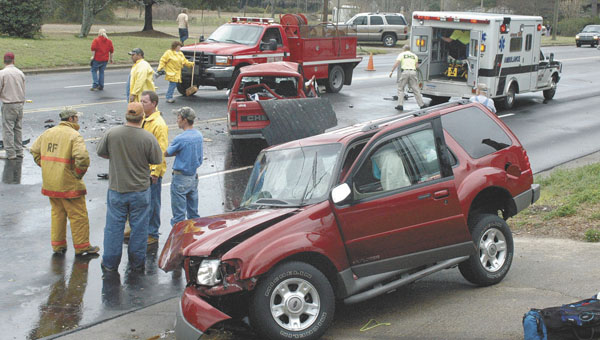 David Wiltshire could face decades in prison after a jury of seven women and five men Wednesday found him guilty of the lesser included offense of manslaughter in the deaths of two women.

Wiltshire was charged with murder in the 2007 deaths of his fiancée, Christy Wright Still, 34, of Evergreen, and Deanna VanGieson of Theodore. VanGieson was an orthopedic nurse who worked in Andalusia. Still was a passenger in Wiltshire’s vehicle and died at the scene. VanGieson died two days later at Andalusia Regional Hospital.

The wreck occurred on March 1, 2007, the same day that tornadoes devastated Enterprise, claiming the lives of five students and injuring 50 others.

The state presented evidence that Wiltshire, who also sustained serious injuries in the crash, tested positive for THC (marijuana), opiates, and benzodiazapene (used to treat anxiety or seizures).

Witnesses for the state also said that they had seen Wiltshire driving erratically before the crash, and one witness testified that he left the road to avoid being hit by Wiltshire, then witnessed the wreck in his rear-view mirror.

Wiltshire testified that weather conditions caused his vehicle to hydroplane.

When Judge Lex Short instructed the jury Tuesday afternoon, he told them if they did not believe Wiltshire guilty of murder, they could find him guilty of the lesser included offenses of manslaughter or criminally negligent homicide. Jurors deliberated for about 90 minutes Tuesday before asking the judge for legal definitions of the possible charges.

In Alabama, a person can be guilty of murder if, “Under circumstances manifesting extreme indifference to human life, he or she recklessly engages in conduct which creates a grave risk of death to a person other than himself or herself, and thereby causes the death of another person.” (Code of Alabama, Section 13A-6-2).

A person can be guilty of manslaughter if, “He recklessly causes the death of another person.” (Code of Alabama, Section 13A-6-3). Manslaughter is a Class B felony. The offense carries a maximum sentence of 20 years.

The jury deliberated for approximately another hour Wednesday morning before returning its verdict. Sentencing is set for 9 a.m. on Jan. 12, 2012.

Wiltshire has been in the county jail since his indictment in the case in late 2007.