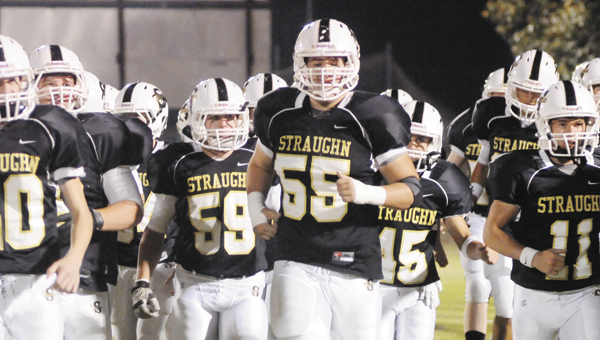 Straughn went back to being a Class 3A school after the new reclassification realignments were released Wednesday. | Andrew Garner/Star-News

There’s a shake-up in classifications and realignments in the county with four local teams making changes.

Andalusia, Straughn, Opp and Red Level are on the move in football and basketball after the Alabama High School Athletic Association released the new reclassification realignment for the next two school years on Wednesday.

The AHSAA central board of control approved the reclassifications yesterday, and the process is fulfilled every two years in consideration of the changing of enrollment in schools, school consolidations and closings, new schools and association members and current member schools adding sports to their interscholastic program.

Alabama high schools will remain divided into six classifications from 1A-6A for competition in the championship programs. The new alignments will go into effect in the fall of 2012.

Andalusia, Straughn, Opp and Red Level are the only local teams that have been affected by the new reclassification realignment.

The Bulldogs switched back to Region 1 in Class 4A in a late change Wednesday night. AHS will compete with Clarke County, Escambia County, Hillcrest-Evergreen, Monroe County, Thomasville, UMS-Wright and Wilcox Central for the next two seasons in region action.

In the late change, Andalusia replaced St. Paul’s, who was moved back up to Class 5A, after the AHSAA had to push Pope John Paul II into 4A.

“It’s a tough region and is always a tough region,” Seymore said. “In my eyes, they’ve still got two guys left in the playoffs (UMS-Wright; and Jackson, who moved to Class 5A, Region 3).

“I’m excited,” he said. “There will be definitely a lot more travel involved. I’m excited about going over and having the opportunity to play the UMS-Wrights and Thomasvilles.”

SHS dropped down a classification to Class 3A from 4A, and will compete in Region 1 in football with Opp, who switched from Region 2.

“It was no surprise,” SHS head football coach Trent Taylor said about the new reclassification realignments. “Last year’s senior class was a huge class for us, and really prompted us to be a 4A school.”

“However, for the travel and money, it’s not going to be good,” he said. “I worry about that more than anybody else. To end up a very good football team, you have to beat good folks. I look forward to the challenge to play those teams.”

With 140 students enrolled last month, Red Level will now compete as a Class 1A school, and will join local teams Pleasant Home and Florala in Region 2 action.

RLS head football coach Tony Ingram wanted to reassure folks that it’s not going to be any easier playing in 1A.

“We just jumped right in there with Brantley, Pleasant Home is coming off a great year and Florala is on its way back.”

Also in Class 1A, Region 2 are Geneva County, Kinston, Georgiana and McKenzie.

In basketball, Red Level is in Area 3 with Brantley, J.F. Shields, Georgiana and McKenzie, and Opp is in Area 2 with Excel, Southside Selma and Straughn.

The AHSAA has released the realignments for football and basketball for 2012-14 seasons. Opp stays in Class 3A, but moved... read more