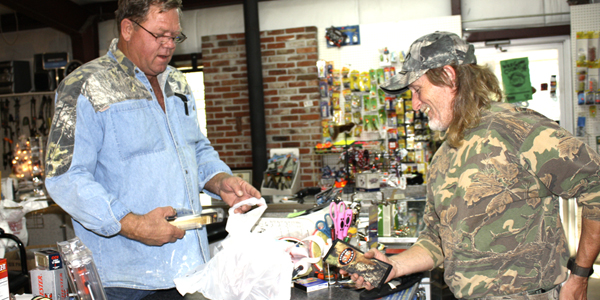 Hunting season is a prime money-making season for local sporting goods stores such as Stokes.

Hunting season can spell out “big bucks” for both hunters and local business owners.

Last weekend was the annual youth hunt in Alabama, but Saturday will mark the official beginning of the 2011 deer season.

Sporting Lifestyles manager Ralph Ricks said the hunting and fishing goods business, which is located in the Westgate Plaza, timed its grand opening last year with the last six weeks of deer season. And this year, the business is back by the droves, he said.

“We opened last December and had a jam up first six weeks,” he said. “After that it trickled down a bit. Fishing season was good, and we were glad for every bit of it. But when it got closer to bow season, you could see the traffic pick up.”

Ricks said August had been the highest grossing sales month for the store, but that’s changed – all thanks to deer season.

“We’re only half way through November, and so far, this month has been higher than any month since that January,” he said.

Hunters – who range from seasoned veterans to those taking to the woods for the first time with their fathers – have spent the last few weeks purchasing scent control items – since deer have an exceptional sense of smell – and ammunition.

“Starting at the first part of September, people were coming in to look around,” Ricks said. “Now, they’re coming in to buy, and that’s great news for us.”

Ricks said he expects the buying trend to continue through the holidays and onto the first of the year. The hunting season on deer officially ends Jan. 31.

For Carolyn Morris at Stokes Sporting Goods, her biggest sales figures are intertwined with hunting season and Christmas.

“Usually beginning in September, bow hunters start showing up and looking around,” Morris said. “From then it’s on to gun season, which comes in this weekend.

“We’ve already started having lookers coming in and getting Christmas ideas,” she said. “A lot of fellows send a list in, and we have, in times over the years, let people fill out a wish list,” she said.

Troopers begin their investigation into the accident that sent three to the hospital. A number of Red Level students were... read more