Focusing on the team 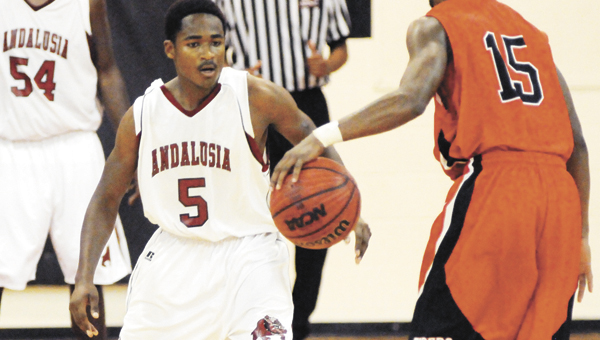 The Bulldogs will travel to play in the 2011 Enterprise Thanksgiving Tournament, starting today at 11:30 a.m. against Red Level. The girls will also participate in the tournament, and will get under way at 10 a.m. today against Class 6A school Prattville.

Robertson said the extent of his focus right now is to try to get the boys in “basketball” shape.

Andalusia is coming off a 1-1 start to the season. The Bulldogs fell to EHS 65-57 on Thursday night, and beat Dothan 61-56 on Monday night in their season-opener.

“(Thursday night), we got beat by eight points, but we were in the ball game from the beginning all of the way,” Robertson said. “All we had to do was carry out our plan. I told them in the dressing room that Enterprise didn’t beat us, we beat ourselves.”

Robertson said he isn’t pleased with the Bulldogs’ turn over margin.

“The more people you play, the more turnovers and mistakes you make,” he said. “You don’t expect that many mistakes out of the same ones. Right now, everyone we’ve got is playing a different role. The only returning starter is Jacard Townsend, who is playing at the four position this year, instead of the five position that he played last year.”

Andalusia played one player off the bench Thursday night, compared to the Wildcats’ five or six.

The Lady Bulldogs will have a tough start to their tournament today, and if they do what they normally do every game, then they will be OK, head girls coach Bennie Shellhouse said.

“It will be a tough contest,” Shellhouse said. “I know they (Prattville) play a 2-3 zone. We played them last year. We’re familiar with their style.

“The biggest thing for us is to do what we’re supposed to do,” he said. “If we can control the ball game from the defensive side, then I feel pretty good about it.”

Like the boys team, the Lady Bulldogs are coming off a close loss to the Lady Wildcats, who they lost to 54-51 in over time on Thursday night.

Shellhouse said it was good to get in a game that was close against EHS this early in the season.

“You can learn from it,” he said. “Everybody knows what they’ve got to do to get better. We’ve just got to make sure we do it.”

For the girls, the Lady Bulldogs have Central Phenix-City, Prattville and Dothan.

The tournament will end Tuesday with the championships, and games that will decide third, fourth and fifth place.