Joblessness down, some retailers hire 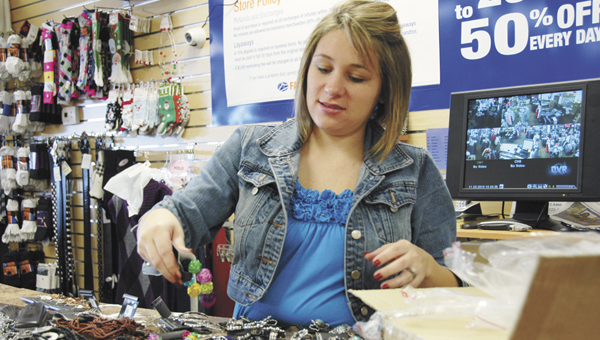 Covington County’s unemployment rate was down 0.4 percentage points for October, and at least one local retailer has hired more than a dozen employees for the holiday season.

In October, the county unemployment rate dropped to 9 percent from September’s 9.4 percent.

“We’ve got lots of extra staffing,” manager Dennis Cockrell said. “We have more than a dozen new employees.”

On Friday, Gov. Robert Bentley announced that the state’s unemployment rate dropped by half of a percentage point to 9.3 percent.

The unemployment rate in September was 9.8 percent.

This is the fourth consecutive month the state’s rate has decreased.

“The drop in Alabama’s unemployment rate is certainly good news for our state,” Bentley said. “While we are still a long way from reaching full employment, October’s decline shows positive momentum for our state as we continue our mission to put Alabamians back to work.”

Alabama Industrial Relations Director Tom Surtees said the drop in the unemployment rate is a positive sign in economic recovery.

“We are definitely excited to be able to announce a significant drop in our unemployment rate,” Surtees said. “We are continuing to notice positive signs in our economic recovery. Our initial unemployment claims are lower than they have been over the past four years, as is the amount of our benefit payments.”

Surtees said statewide nearly 10,000 jobs were added, which contributed to a large decrease.

“We are certainly not out of the woods yet, but we are optimistic that we will continue to see positive hiring trends for the rest of the year, especially as seasonal hiring picks up for the holidays.”

Neighboring counties also saw a decrease in the number of residents unemployed.