Karthaus: Be thankful as David 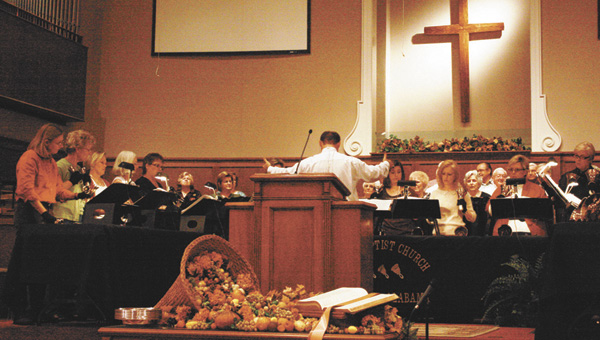 First Baptist Church Pastor Fred Karthaus told those gathered at the annual community Thanksgiving service everyone should be more like King David.

Karthaus said that even though David’s life wasn’t perfect, he acknowledged the source of his blessings – God.

“He always had a sense of optimism,” he said. “He had many reasons to grumble and complain. His life was a trial, but he was a man after God’s own heart.”

Karthaus recalled how God used him as a little shepherd boy to defeat the giant Goliath, how King Saul was jealous of David and how he tried to have him killed. He also spoke of how he was confronted by the prophet Nathan when he had an affair with Bathsheba and how he even lost a son, but despite the struggles God used them for the better.

“The struggles made him bigger, bolder and stronger in the Lord,” Karthaus said.

Just as David came out stronger by remaining optimistic and giving praise, Karthaus said so should everyone else.

“It’s easy to believe we have so little and everyone else has much more,” he said. “But it becomes much easier if we give thanksgiving. Folks who don’t look forward to the future have a hard time enjoying the present. A thankful heart changes that.”

An Andalusia man was convicted Tuesday of criminally negligent homicide in the traffic accident that killed his pregnant daughter in... read more