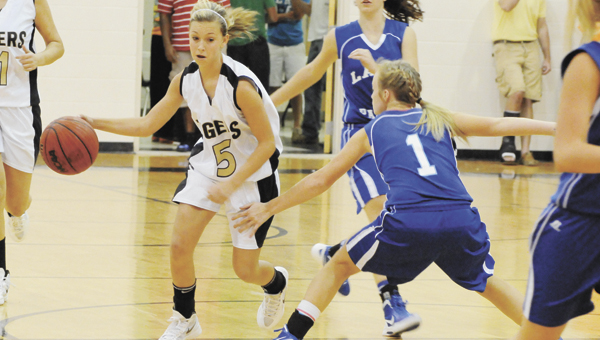 Straughn and Opp’s girls basketball teams will meet in the finals of the SHS Thanksgiving Tournament today after earning semifinal wins on Tuesday night.

SHS girls basketball coach Scott Kinsaul said the game against the Lady Raiders was a good contest to have as a pre-cursor to tonight’s championship game against Opp.

During Opp’s victory over Brantley, the Lady Bobcats spread the Lady Bulldogs’ offense on the court, utilizing their defense to force turnovers for transitions and easy buckets.

“I felt like we came out on defense and put some pressure on them,” OHS girls basketball coach Allison Gregory said. “I thought we did a great job rotating off the back side and putting pressure on the ball.”

Opp and Straughn will play in the finals at 3:30 p.m. today.

The Lady Tigers only allowed three Houston Academy free throws in the entire first half to roll away with the victory. SHS outscored the Lady Raiders 11-2 in the first period, and 16-1 in the second.

“I thought we came out and played real hard to begin with,” Kinsaul said. “We just kind of held on.”

SHS jumped out to a 11-0 lead late in the first period, but Houston Academy’s Sarah Beth Brown ended the shut out when she drained a pair of free throws.

Jacie Williamson, who led Straughn with 14 points, scored six of her total points in the first period — four of which were off passes.

Straughn’s strong inside presence in the second period netted easy lay up baskets for guard Brittany Driver, who chipped in 10 points for the Lady Tigers in the win.

However, freshman guard Katelyn Kinsaul drove the offense, finding loop holes for easy passes in the middle for some points. Kinsaul finished with eight points.

In the third period, Straughn took leads of 31-7, 37-9 and finished the scoring drive to take a 41-17 lead going into the final period of the contest.

During the second half, the Lady Tigers even found time to work on man-to-man fundamentals, Kinsaul said.

“We worked on our man-to-man and man offense,” he said. “We stopped pressing and fast breaking to work on some stuff.”

Off the bench, Janelle Nurse scored seven points for Straughn.

Right off the bat, Opp’s Ali Jessie drained a 3-pointer, and the Lady Bobcats took a 5-0 early lead to pace the Lady Bulldogs.

Laiken Free, who finished with 12 points, scored six of her points in the first 4:02 of the contest.

The Lady Bobcats took a commanding 16-8 lead after the first period, and then outscored Brantley 10-8 in the second period to take a 26-16 lead at half time.

Opp went to a 1-3-1 offense, and stuck to a 2-3 defensive look throughout the second period, getting turnovers for transitions to easy buckets.

Opp opened the flood gates in the third period, going on a 12-2 run early.

The Lady Bobcats led 38-24 at the end of the third period, and outscored the Lady Bulldogs 12-9 on passes to the inside off transitions in the fourth period.