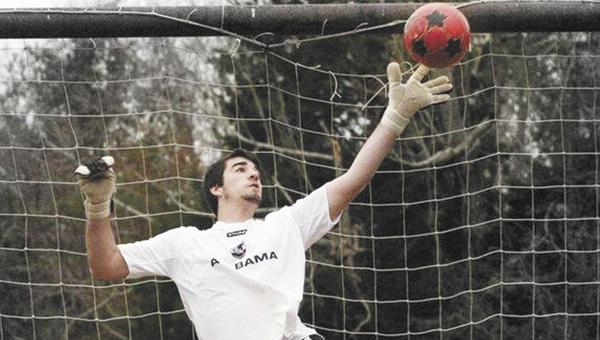 Christopher Smith goes up for a save.

Soccer is in Jennifer Botta’s blood.

The Andalusia High School junior spoke at a recent Board of Education meeting, presenting her case that a soccer program would work at the high school. If everything goes through, Botta will be taking the field in the spring for her junior season.

Botta said a soccer program at the high school would be a good asset for students who don’t have the build to play other sports like football.

“All of the other sports we have deal with your hands,” she said. “Volleyball is a hand sport — basketball and softball — you use your hands in those sports.”

Botta, 17, grew up in West Palm Beach, Fla., and started playing her chosen sport at the age of 4. She grew up home-schooled, and moved to Andalusia when she was in the sixth grade.

“When we got here, it was nice in the rec-league, but when you get to high school, it’s a lot harder,” she said. “They don’t have a team here and you lose it, and you can’t play in the rec league anymore (when you get older).”

Mark Ingram, who has been involved with the city’s soccer program since 1996, said now is the perfect time to start a soccer program at the high school.

“We have some tremendous talent both at the high school and middle school level and most of all, we have kids that are dedicated to the sport,” Ingram said. “We actually have been trying to get soccer as a sport in the school system for the last 10 years.”

Ingram’s involvement in the local soccer program started when his son, Marcus, started playing at the age of 4.

“We started a travel team for his age group and competed in several tournaments in Alabama and Florida,” he said. “A few years later, Marcus began playing with the Enterprise Wings soccer team.

“It was then, that I decided to take the certification to be a referee,” he said.

Ingram has been a soccer referee for about 10 years. He now manages and assigns referees for the city’s rec program. Additionally, Marcus serves as a referee for the program, along with students from the high school and middle school.

The process to establish a soccer program in the schools starts with a petition, Botta said.

“We went to the board meeting, and they (the board) said we’ll do everything possible to help you guys,” she said. “Now, we’re getting actual people to sign up.”

Botta said that she received 250 signatures by the middle of last week, and said she went to the board meeting to let the board know that students do want a soccer program at the schools.

“I felt like I could say a lot of things that can influence them,” she said. “It’s different when it comes from the mouth of a student and from someone who will actually play it, rather than from a parent or lawyer. I just really wanted it. I hope they took it to heart.”

Ingram said starting a soccer program will not be easy, “but we have the support of community leaders, soccer coaches and parents.”

“The one thing that we have to do is find the right soccer coach,” he said. “It’s going to take a good coach that truly understands the game to get the players where they need to be to compete with other teams in our region.”

“A soccer program will not happen overnight, and will take two to three years to get the program where it needs to be to be competitive,” he said. “That’s why it’s critical to start a program in the middle school, so it can be a feeder to the high school.”

Botta’s parents, Patricia and Carlos Botta, are from Brazil and Argentina, respectively, and soccer has been ingrained in the family for years.

She said soccer is her passion because it’s a “life” sport.

“It really helps you in all aspects of life because soccer is a team sport and it helps you deal with others, and it gives you motivation and it teaches you not to quit, and to never give up,” Botta said.

Auburn junior and former Andalusia stand out Blanche Alverson led the Lady Tigers with 14 points in her team’s 55-47... read more