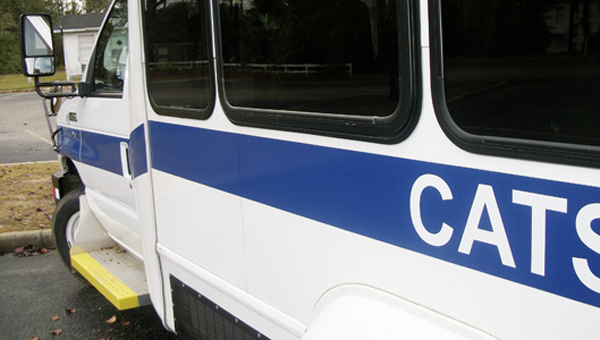 CATS is facing a large budget deficit, which could cause drastic changes to the transportation system. | Stephanie Nelson/Star-News

A nearly $36,000 funding deficit could mean a drastic change in the county’s transportation services – including a reduction in CATS buses or an increase in fares.

Ruth Edson, director of the Covington Area Transit System, told county commissioners Monday the agency has lost several contracts, including one with the Covington County School System – its biggest contract on record. In total, there is a shortage of $35,910, Edson said.

“This is the first time something like this has happened in 19 years,” she said. “If we can’t find an alternative method of revenue, I’m not sure what’s going to happen.”

Now, the department is seeking public input to its funding crisis.

“A lot of people don’t realize that this is a true public transportation system,” Edson said. “You don’t have to be disabled to ride the CATS van. We will come to your home, pick you up and take you to your destination – all for a small fee.”

The agency services all areas of the county – including Carolina, Gantt, Red Level, Opp, Florala, Wing and all points in between.

“But there’s no way the program could be self-sustaining on just fare box money alone, which is why contracts are so important,” Edson said. “We depend on contracts to fill in the gap.”

The agency recoups 50 percent of its operational costs after the 20 percent is paid, she said.

“For example, say it costs us $10,000 a month,” she said. “Automatically, we have to recoup 20 percent of that in fare box money. If we only collect $1,800, we have to make up the difference using money from our contracts.

In the past, local municipalities, with the exception of Florala, have helped cover the costs of providing transportation to its citizens.

“We’re to the point now that something has to be done,” Edson said. “We’ve already cut back to the bare bones, and we’re about to be faced with difficult decisions.”

“And cutting back in the areas we serve and raising fee to ride are also options,” she said. “None of which I want to do, but this is too valuable of a program to lose.”

A public hearing is set for Dec. 12 at 9:30 a.m. to allow for public input in raising additional revenues for the program at the county adminstration office.

Colder temperatures in store this week

Local temperatures are expected to dip below freezing in the coming days as a cold front makes it way across... read more