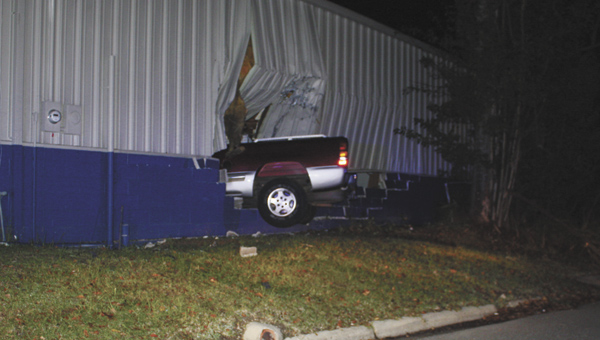 John Hutcheson’s truck is shown after it crashed into a wall at A&A Welding. | Courtesy photo

An Andalusia man crashed his truck into a local business, led officers on a foot pursuit and ended up in not only in the hospital, but also in jail, Monday night.

Sgt. Jason Curry with the Andalusia Police Department said the incident began when an officer attempted to stop John Hutcheson, 25, for a traffic violation on Opp Avenue.

“That’s when a short pursuit began, but ended not too long after that on Smith Street when he crashed into A&A Welding,” Curry said. “He fled the scene but was captured two blocks away on Pugh Street.”

Curry said the building sustained tens of thousands of dollars in damages when Hutcheson crashed through its side. Hutcheson, who was believed to be intoxicated at the time of the incident, was transported to Andalusia Regional Hospital for evaluation and then the Covington County Jail, where he was charged with resisting arrest, attempting to elude and third-degree criminal mischief. Curry said other charges are pending.

A more than $90,000 grant will ensure abuse victims can continue to receive services at Opport-unity House, the women and... read more