Focusing on what matters 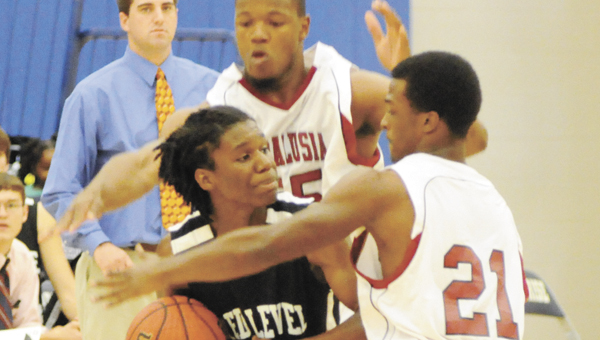 Andalusia will begin a two-game stretch tonight, starting with Pleasant Home and will end the week against Opp on Friday night.

But Bulldogs head basketball coach Richard Robertson is only concerned about one thing — his team.

The Bulldogs are coming off a 49-40 victory over Monroe County. Andalusia got the win, but it came at a cost, Robertson said.

“We got in foul trouble (Monday night), and against Enterprise the other night (last Mon., Nov. 21),” he said. “When you get in foul trouble, you can’t play your normal game.”

After the Bulldogs play Pleasant Home tonight, who is coming off a 60-47 win over Straughn, Opp will have a shot at AHS.

The Bobcats have only played in one game this season so far. OHS lost to Red Level on Nov. 18.

Sansom said he took some good things away from the season-opener against RLHS.

“We did some good things offensively at times, and defensively, in the second quarter, we had some break downs,” he said. “We had some younger guys playing, and the main thing we need is to be playing to get some experience.”

One disadvantage to playing two games back-to-back is the schemes the Bulldogs have to use during the games, Robertson said.

“You just have to jump in there with both feet and go ahead,” Sansom said.

Tip off in Andalusia for both nights is at 4:30, starting with the B-team.

Andalusia head girls basketball coach Bennie Shellhouse had nothing but respect for who the Lady Bulldogs will face tomorrow night... read more