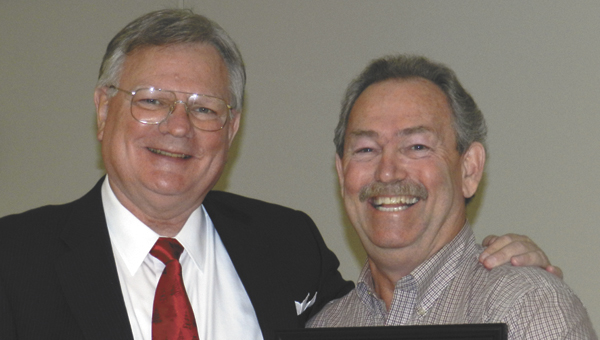 Dwight Mikel, who has survived nine political administrations and countless baseball tournaments as the City of Andalusia’s director of leisure services, was feted with a retirement luncheon Thursday.

Sonja Godwin, who has worked as his administrative assistant, said she learned two things from him.

“He always says, ‘It’s easier to beg for forgiveness than to ask permission,’ and, ‘If you can’t go first class, go home.’ ”

He got a first-class sendoff on his way “home,” including a steak-and-shrimp lunch shared with his family and co-workers at the adult activity center, and received a few of his favorite things, like a basket full of homemade sugar cookies; a homemade cheesecake; a chocolate on chocolate cake; a box filled with Reese’s cups; and a box of money.

Those who worked under his direction called him “tough” and “demanding.”

“He was the first to chew us out if we did anything wrong, but he was also the first to defend us if anyone else did.”

Things have changed in the more than 36 years he’s worked with the city.

“The biggest thing is the cooperation between departments. The camaraderie between all the departments is great,” he said. “At one time it was little kingdoms. Now, everybody works together.

The tools have improved, too, he said.

“Back when we started, we had one Dynamark, 36-inch riding mower,” he said. “That was the only equipment. The equipment has improved and the technology has, too.”

Mikel’s departure comes at a time when his department’s facility is undergoing a major transformation with the renovation of Johnson Park. He’ll still be around some to see that project through, he said.

He knows he’ll miss the daily interaction with the employees in his department, he said, but he’s not worried.

“The thing I’m going to miss is the employees, and I can show up to see them any time,” he said. “If I need to be grounded, I’ll stop by the shop or the activity center. We’ve been together a long time.”

Meanwhile, he’ll be working as the manager of Foxwood Village Apartments.