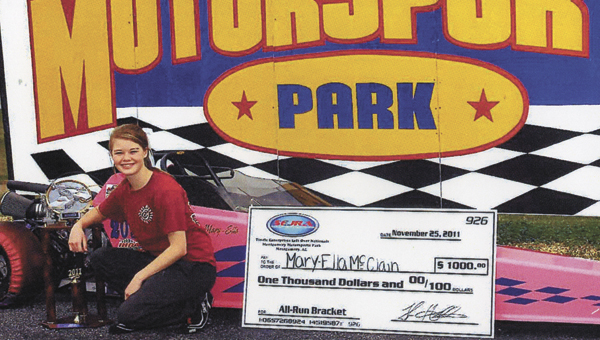 Mary-Ella McClain won the $1,000 Bracket Race at the South East Region Junior Association Race Nov. 25-26 at Montgomery Motorsports Park. She raced against other racers ages 8-18, and has raced Junior Dragsters since she was 8 years old. McClain also received an award for finishing 8th in points for the entire region, and 10th in points in her age division class. Additionally, she also won a trophy and the award for track champion for ages 13-17 at Emerald Coast Dragway in Holt, Fla. McClain is the daughter of Angie and Kevin McClain of Andalusia, and the granddaughter of Barbara and Bill McClain. | Courtesy photo