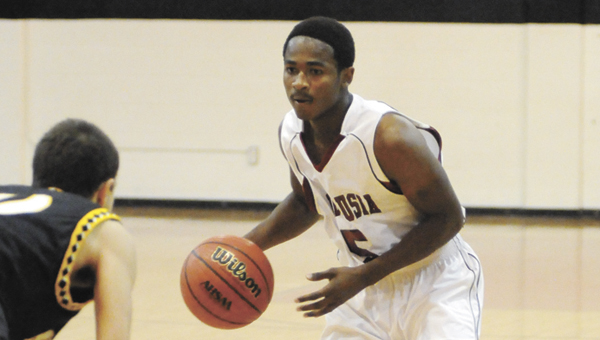 Andalusia’s defensive play held Opp to three points in the first period, and the Bulldogs ran away to a 50-37 victory over the Bobcats on Friday night at AHS.

“We jumped out on them, but they came back,” AHS head boys basketball coach Richard Robertson said. “Opp has a good team. Coach (Ronnie) Sansom has done a really good job with them.

“We had a lack of execution and were lackadaisical in the second half and part of the second quarter,” he said. “We’ve got to get better with every game.”

The Bulldogs outscored the Bobcats 16-3 in the first, going on a 13-0 run before an Opp 3-pointer late in the opening-period.

Sam Byrd, who led the Bulldogs with 17 points, scored eight of his points in the first period.

Andalusia led as much as 22-3 at the beginning of the second period, where the Bulldogs outscored the Bobcats 15-12 to lead 31-15 at half time.

Opp’s Tarise Stoudemire led the Bobcats with 12 points, and helped OHS outscore the Bulldogs 22-19 in the second half.

“We came out and competed better in the second half,” Sansom said. “I was proud of the edffort. We got a little better just by playing.

“We’re not playing with the intensity I’d like for us to play with on defense, and we don’t have anybody to step up and take the ball on offense. We’ve got to find out who that’s going to be.”

However, Andalusia’s inside game was too powerful, netting easy buckets under the net. The Bulldogs took a 43-23 lead in the third period after a Byrd lay up.

Then, Opp went on a 12-0 run in the fourth period to close out the game.

Jacard Townsend and Joe Flowers had 10 points each. Townsend added 10 rebounds on the night.

Andalusia’s game against Luverne Monday night has been rescheduled to Tuesday night because of the fall sports banquet.

The Bulldogs will also play host to their 45th annual invitational basketball tournament, starting on Thursday.

Andalusia will play Florala; Opp plays Brantley; Enterprise has a bye; and Luverne will play Elba on Thursday. The first game is at 4:30 p.m. at AHS.

Iron Bowl win was a ‘relief’