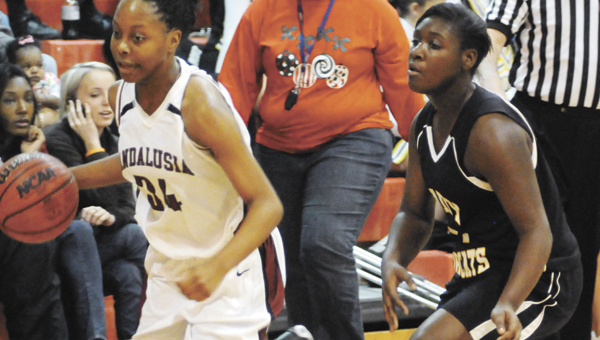 Andalusia seniors Alexis Horton and Shi’Amber Townsend combined for 47 points to help lead the Lady Bulldogs to a 58-31 win over rival Opp on Friday night at AHS.

Horton who finished with 21 points, found Townsend down open in the middle for several easy shots, especially in the second half. Townsend led the Lady Bulldogs with 26 points.

The key for the Lady Bulldogs in the second half was spreading Opp’s defense out, Herring said.

“We wanted to spread them out, and that got us up the middle for some easy lay ups,” she said.

Through it all, OHS head girls basketball coach Allison Gregory said her girls played hard, and that she was proud of them.

“I felt like we played through the end,” Gregory said. “I had one of my players diving head-first for the ball.

“I’m proud of the girls,” she said. “I know with a 27-point loss, I probably sound crazy. Nisha (Stoudemire, who led Opp with 15 points) played her butt off in the post. She was big.”

The Lady Bobcats matched up well with Andalusia in the first period, only hold the Lady Bulldogs to 13 points compared to their 10.

“They came out and executed the game plan,” Gregory said about the first period. “We did what we were supposed to do.”

The Lady Bobcats took a 6-4 lead on a Stoudemire 3-point play on a foul.

Andalusia answered with a lay up on a steal by Townsend, and Opp took its last lead of the night when Stoudemire drained a jumper to make it 8-7 in the first period.

From there, AHS powered its inside game and full-court press for turnovers and buckets.

Alison Daniels, who had five points for the Lady Bulldogs, made a jumper as time expired in the first to take the 13-10 lead going into the second period.

Alectricia Barnes capped a small 4-0 run with a floater from six feet out.

With 56 seconds left, Stoudemire got a jumper and the Lady Bobcats trailed 26-17.

Opp got a steal and on a transition pass to Savannah Gerber, Barnes comes up with a block, Townsend drives for the lay up but was fouled. Townsend made her free throws and a Horton 3-pointer later, the first half came to an end.

Andalusia took a 41-21 lead in the third period, and the Lady Bobcats — playing tired — never came back.

Herring said a big half time adjustment was made for Andalusia to finish strong.

“We just told them that they have a bad habit of letting up, and not staying in it,” Herring said. “We told them to stay in it, and stay hungry.”

Opp’s Asia Edwards had five points for the Lady Bobcats.

Andalusia’s Monday night game against Luverne has been rescheduled for Tuesday night at LHS.