Iron Bowl win was a ‘relief’ 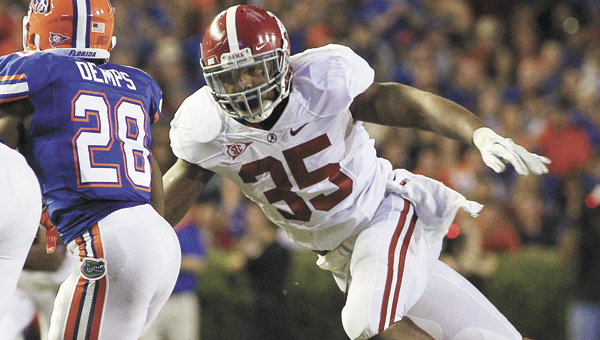 After Alabama’s 42-14 win over Auburn last Saturday, the Crimson Tide celebrated a game they finished with style, and junior linebacker and former Andalusia stand out Nico Johnson said the win was a “relief” for the team.

“We were fortunate enough to get the win,” Johnson said. “It was a big relief, and on top of that, we want to get to the goal of a national championship.

“We knew the road went through Auburn, and that we had to perform our best,” he said.

Johnson tallied two solo tackles against the Tigers, and is at 43 total tackles this season.

When asked how he would rate his performance in the Iron Bowl, Johnson said he did “alright.”

“My mind set, week in and week out, no matter how well we do, is to try and go out and play against perfection, instead of the opponent,” he said.

Alabama’s stout defense stopped Auburn’s offense to no touchdowns during the game. Auburn’s 14 points came on defense, where it recovered a fumble in the end zone, and on special teams on a kick off return for a touchdown.

This week, the Crimson Tide will have to wait and see whether a BCS National Championship game will be on the horizon, or if they will get a post season bowl berth.

No. 1 LSU will face No. 12 Georgia at 3 p.m. CST today in the Southeaster Conference Championship in Atlanta at the Georgia Dome — a game Johnson said he’ll probably watch.

“I’m sure I will just to see how everything goes,” Johnson said. “For me personally, I want to play LSU (again).”

This week, Johnson said the team is not practicing, but is using the time to execute its fourth-quarter program with some conditioning.

“We don’t know who we’re going to play, and Coach (Nick Saban) is taking the week to let us stay in shape and get everybody healthy,” Johnson said. “We should kick up next week.”

But when the game ended last week against Auburn, the team couldn’t have been more “happy” to get the win, Johnson said.

“Everybody was happy,” Johnson said. “We had worked so hard to finish our games.

“I was happy for the seniors,” he said. “Last year we got beat, and the seniors got their revenge no matter what everybody said. We worked so hard.”

Florala earned its first win of the season Friday night with a 51-46 victory over Straughn in Wildcats territory. “I... read more