Wossilek: The next teen superstar? 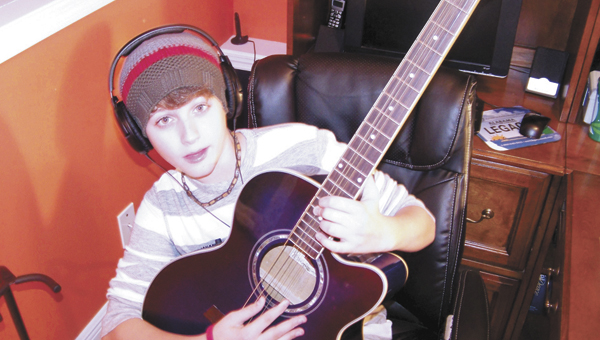 Christian Wossilek will perform in round 2 of a statewide talent search. If he wins the entire competition, he will receive a recording contract. | Courtesy photo

Move over Justin Beiber – you might have some competition in Andalusia’s Christian Wossilek.

To hear him sing, one is shocked to learn that only six short months ago, the sixth grader had never sung in front of a crowd.

Combine that with the fact he’s is now preparing for the second round of competition in the “Alabama Talent Hunt,” and one thing is for certain – the boy has skills.

Wossilek, the son of Joey and Kay Wossilek, said he’s always loved music and is hoping that the contest, which, if he wins the entire contest, could land him a recording contract.

He started playing the drums at 3. Then, three years ago, he picked up the piano; a year ago, the guitar and bass.

Sponsored by the Alabama Talent Co., the competition looks to expose the abundance of untapped talent within the state of Alabama.

It’s no secret that the state is filled with awesome talent. After all, just look at some of the most recent wins on American Idol from the state.

Now, while it’s not the American Idol platform, Wossilek hopes the contests will begin making his dreams of stardom come true. He’s already made it through the preliminary round and is waiting to compete next month in the competition’s regional semi-finals where, in the competition, there is a total of five rounds of competition with five age categories: elementary, middle, high school, young adult and adult.

On Wednesday, he’ll share his musical talents with Covington County residents in a free concert.

“I’ve got to get some experience,” Wosselik said of the performance. “I’ve only been singing about six months. I found the flyer for the competition on the floor of the bandroom, took it home and said, ‘I want to do this.’

“My parents have been very supportive,” he said. “I was very shy, but last summer, I went to spend some time with my uncle in Atlanta who’s a musician. He has a home recording studio, and we recorded a song together.

“After that, I kind of came out of my shell,” he said.

A cold the day of the first round of competition caused a song change from Justin Beiber’s “You Smile” to Bruno Mars “The Lazy Song,” but he hasn’t looked back.

Now, Wossilek is gearing up for the second round, which is thge end of January in front a of live ticketed audience (the venue has yet to be announced), and he said he needs practice performing in front of a large, live audience.

“I like to entertain people through music,” he said. “I get that nervousness on first song, you know, because when you just get on stage, you see all the people you don’t know. You want to please them, but after that, that’s when I start having fun.

“I say a silent prayer, and then just do it,” he said.

Wossilek, who will also perform at the 2012 Rattlesnake Rodeo, will take perform Wednesday at 7 p.m. in the parking lot between Springdale and City Hall. It’s free to the public, but $10 “Team Christian” t-shirts will be sold, with $1 donated to “Cooper’s Crew,” for leukemia patient Cooper Sasser.

Wosselik will perform a variety of music from Christian and secular to Christmas and Top 40.

T-shirt pre-orders are available from Wossilek’s Facebook page, and to get a taste of the night’s performance, see him on Youtube at TheChristianWossilek.