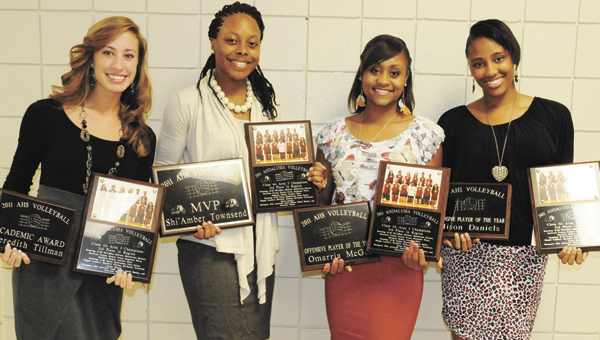 In addition, special awards were given to athletes that excelled during their sports’ respective season and the varsity cheerleaders were introduced.

The varsity volleyball team finished the 2011 season in the Class 4A sub-state round, falling to Calera. The Lady Bulldogs finished the season 15-14.

In football, the Bulldogs finished the regular season undefeated, but fell in the first round of the Class 4A state playoffs.

Before special awards were given, AHS head football coach Brian Seymore recognized the team’s crew who helped deliver water to the players during games. The crew on the team were Wes Parker, Tucker Glenn and Drew Seymore.

For more pictures of the banquet, visit our website at www.andalusiastarnews.com.