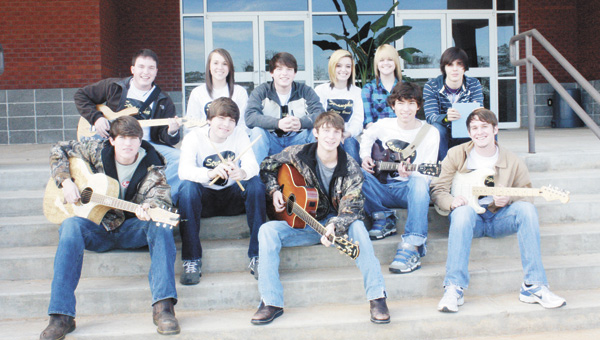 The sounds of country, Southern Rock and 80s can be heard through the hall at Straughn High School after school.

McGlaun said each year, she works with students who are musically inclined who want to learn more about music.

“It’s a great deal of fun for me,” she said. “Some years we do more performances than others. This year’s students are very motivated and very talented so we are very involved in our music. This year, the talent these students possess is amazing. “Most times as sponsor, I’m just along for the ride when they happen to need an old bass player to sit in on sessions,” she said. “It’s great to have students who enjoy doing what they do to not only have fun, but also to help their school.”

McGlaun said the students sit around and play music on Tuesday and Thursday afternoons.

“I teach them and they teach each other,” she said. “This year, they just happen to be motivated to sing in front of crowds.”

So far, they have sung in front of the school twice and will perform at the 2012 Relay for Life event.

Campbell said he gets a “rise” out of playing with the other students.

“It’s an awesome, awesome experience,” Veasey said. “It’s exhilarating, very exciting to be on stage and it gets the adrenaline flowing.”

Campbell said he hopes to make a career out of being a musician.

“I want to do it as long as I can, and would like for it to be our profession,” he said.

Some of their favorite songs they are playing include “Mirror Mirror” by Blind Guardian, “Gimmee Three Steps” by Lynyrd Skynyrd, “Christmas in Dixie” by Alabama and “My Kinda Party” by Jason Aldean.

McGlaun said the group is interested in working for any kind of charity, and it’s also in need of a new mixing board.

“A special thanks to Mr. Shannon Driver and Mr. John Evers for allowing us to have the activites we do and being such avid supporters of these students and their interests,” McGlaun said.

An Andalusia man, who described himself as a “sovereign citizen,” has been arrested for acting as a lawyer in Houston... read more