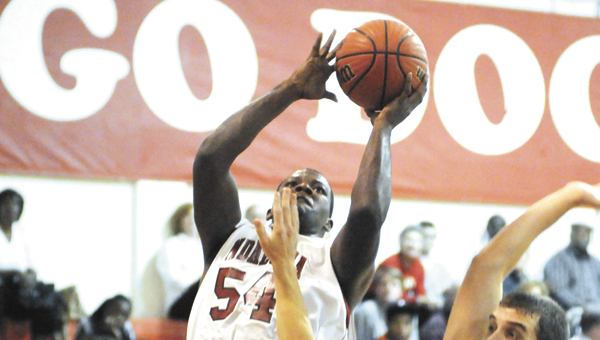 Andalusia’s Sam Byrd jumps up for a shot during last week’s game against Opp at AHS. | Andrew Garner/Star-News

Andalusia will play host to its 45th annual invitational tournament beginning tonight, and the Bulldogs will tip off against Florala at 7:30.

The three-day tournament includes a wide range of teams from different classifications.

The teams in the top half of the bracket — Andalusia, Florala, Opp and Brantley — will play a total of three games, while the bottom half — Enterprise, Luverne and Elba — will play either two or three games.

Andalusia enters the tournament having claimed the title for the past six straight years.

“We’ve got to get better,” he said. “When we played Dothan just before Thanksgiving and well before the road games, I thought we’d be there in four to five games, but we have taken a step back the last two games.”

All in all, Robertson said he expects the tournament to be a good one.

Admission is $5 per person per day.