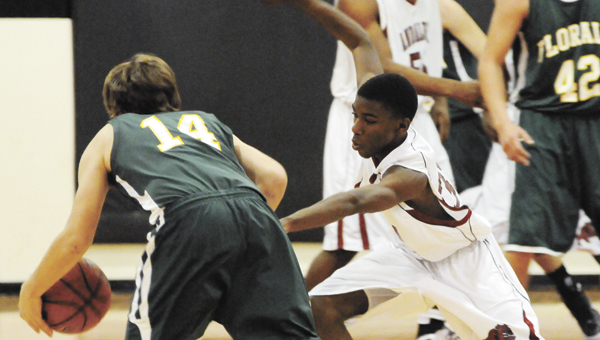 Florala played pretty even against Andalusia in the first half on Thursday night, but the eighth-ranked Bulldogs countered with their size and speed in the second half to win 76-44 in their opening game of the AHS Invitational Tournament.

With this win, Andalusia will play Brantley, who beat Opp 54-40 in earlier Thursday action. AHS will play BHS at 7:30 tonight.

Luverne beat Elba 63-49 to remain undefeated this season in the first game of the day. The Tigers will play Enterprise at 6 tonight.

AHS took an early 8-0 lead thanks to six straight points from Niguel Jones, and an inside pass play from Ashton Evans to leading scorer Jacard Townsend for an easy lay up.

Jonathan Burleson answered with a jumper to put points on the board for the Wildcats.

Townsend made a lane for two points and got a put back to put the Bulldogs ahead 12-2 with 4:48 left in the first period.

Burleson then hit a 3-pointer to cut into Andalusia’s lead by seven points.

Colt Jackson nailed six quick points for the Wildcats later in the first period to but into Andalusia’s lead by seven points at 20-13.

“They have a good team. They’re well-coached,” AHS head boys basketball coach Richard Robertson said. “They had a plan and they executed it. (FHS) Coach (Daniel) Allison is doing a good job, period. We’ve got a lot to be desired, but they had a good plan for us.”

Erik Vega hit a tres to put the Wildcats in a six-point deficit at 22-16, and Jones hit a lay up for Andalusia to help his team take an 8-point lead at 24-16 at the end of the first period.

Burleson answered the run with a 3-pointer, and Jones then hit the back-end of two free throws for the Bulldogs to go up 32-20.

John Bess cut the game back to 10 with an under-the-goal wrap-around lay up.

Andalusia put the game away in the third period when it took a 48-28 lead off of a 6-0 run led by Cross, who finished with 10 points.

The Bulldogs then utilized its speed and size, and took a 60-32 lead on a pass from Townsend to Evans for two points.

Sam Byrd, who had 11 second-half points, made his presence known in the paint to help the Bulldogs go up 62-34.

“It was just hard for us to stay up with them,” Allison said about the second half. “I’m proud of our guys’ performance in the first half. I thought they played real well.

“We just tried to use the second half as a practice to figure out what we could do,” he said. “It’s tough to play against a team with so many athletes as this.”

Byrd then went on to score five points in the fourth period before the second team came into the game.

Townsend led all Bulldog scorers with 20 points, and added eight rebounds; and Jones had 10 points.

Burleson led FHS with 11 points, and Jackson chipped in 10 points.

The Bobcats only scored 11 points in the first half compared to Brantley’s 38 and the second half didn’t go any better for Opp, especially at the start.

OHS was not out of the locker room in time when half time ended, and drew a technical foul, where Brantley’s Terence Bogen made the front-end of a pair of free throws.

Opp scored four points in the first period off of a 3-pointer by leading-scorer Tyler Ferguson, and a free throw by Derek Savage, who also led the Bobcats in buckets.

Nine of Brantley’s 19 points in the first period were from the 3-point range.

OHS head boys coach Ronnie Sansom said his team didn’t come out focused at the start, and that was the difference.

“You have to start focused early,” Sansom said. “You can’t get focused at half time against good teams and win.”

The Bobcats’ best shooting performance came in the fourth where they outscored BHS 19-10.

Savage led the Bobcats with 11 points, and Ferguson chipped in nine points.