More food to needy this year 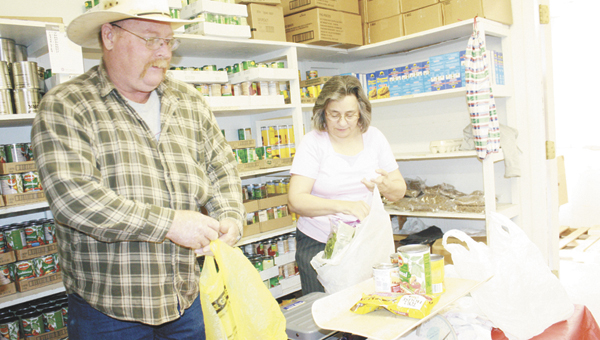 If the increase in the amount of food the Christian Service Center has given away this year is any indication of the economic situation in the county, then more people need food this year than last.

“We’ve given out a good bit more this year than last,” he said.

The Covington Baptist Association purchases the monthly supply, but the center relies on the community to make up for the rest.

“We really need any kind of canned vegetables, meats and dried beans,” he said. “We can also use your old plastic grocery bags.

Those who may be in need of food this season can receive food from the CSC Mondays and Wednesdays from 10 a.m. until 3 p.m.

“It is based on income eligibility and they do sign a statement,” he said. “You do have to live in Covington County and show proof of residence, as well as a picture ID.”

Cole said this is the 25th year of the ministry, and the sales from the retail side of the store go to help fund the food distribution, counseling services and disaster relief response ministry of the CBA.

“We rely a lot on donations from the community,” he said. “We also rely on people making purchases in our store, and our volunteers.”

“Neil Wyatt came here as the director of missions and established the Christian Service Center,” he said. “The main purpose was to give out food, which we are still doing 25 years later.”

The organization has stores in Andalusia, Opp and Florala.

The center is open Monday through Saturday from 9 a.m. until 6 p.m.

No local bell ringers this year

Disappointment in the lack of help distributed locally means there’ll be no Salvation Army bells ringing here this year. And... read more