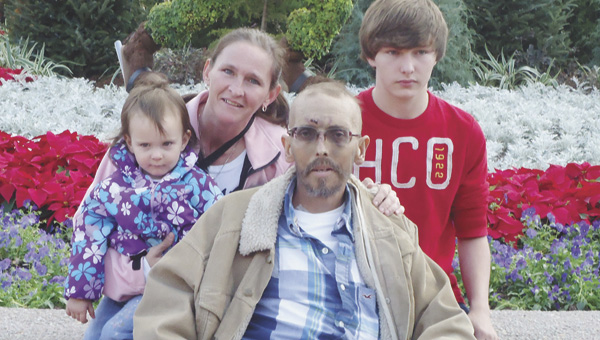 David Pettie, shown here with wife, Carolyn, and children, Hunter and Lakyn, was able to take his family to Disney World thanks to the Jack and Jill Late Stage Cancer Foundation

When you wish upon a star, good things can come true – or at least they did for an Andalusia father recently diagnosed with terminal cancer.

David Pettie, 42, has been fighting Stage 4, non-small cell lung cancer since April. His one wish was to take his wife, Carolyn; son, Hunter, and daughter, Lakyn, to Disney World for a vacation they would never forget.

Thanks to the Jack and Jill Late Stage Cancer Foundation (JAJF), he was able to do just that.

“In October, he was told that the cancer was still there, and doctors had done all they could do,” said sister-in-law Cindy Pettie. “He had wanted to take his kids to Disney World for a long time, but a kidney disease forced him to limit the amount of work he was able to do several years ago, and he didn’t have the funds available for such a trip.”

Enter the family of cancer survivor Julie Layton-Bryant. Bryant, a Straughn Elementary School student, was diagnosed with retinoblastoma, a rapidly developing cancer of the retina and is now in remission.

“Julie is a member of my church,” Pettie said. “After seeing a story about the playhouse the Make a Wish Foundation built for her (which printed in the Summer 2011 edition of South Alabama Living), I called and asked if they could give me any ideas about how to make the trip happen. They told me about the Jack and Jill Late Stage Cancer Foundation.”

The foundation is a national resource providing “Wow experiences” for children and families who have a mom or dad with late stage, limited life expectancy cancer.

‘I ‘googled’ the foundation, called them, and within a week, the trip was approved,” she said. “It was absolutely amazing.”

For 15-year-old Hunter and 2-year-old Lakyn, it was an experience they’ll never forget, their aunt said.

“They got to stay in a five-star resort, were given hopper passes to the Disney parks and (the foundation) even paid for gas and food,” Pettie said. “They had also stocked the kitchen of the condo with all of David’s favorite breakfast foods and left Christmas stockings filled to the rim with goodies for the kids.”

Pettie said it was truly a “family experience.”

“The trip was scheduled for December 1- 4,” she said. “We left Wednesday night so that we could stop part of the way and spend the night so David wouldn’t be so tired. We went to Epcot on Thursday, and Carolyn and the kids went to the Magic Kingdom on Friday, and we all went to the Animal Kingdom on Saturday.”

“I can’t put into words what it meant for us to take this trip,” Pettie said. “We’re just so grateful there are organizations out there to help families in times like this.”

More food to needy this year