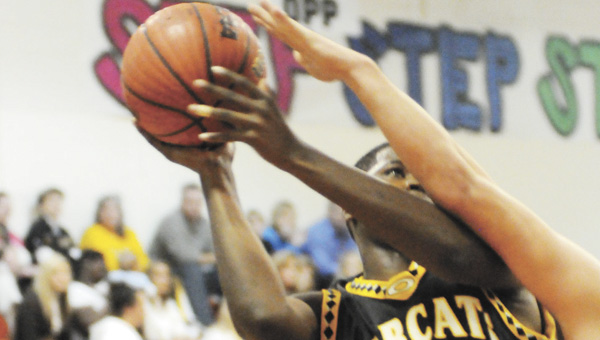 Opp netted its first win of the season Friday night with a 66-47 victory over Florala at Andalusia’s Invitational Tournament.

The Bobcats beat the Wildcats on the boards and played good enough offense to edge FHS.

In the second game of the night, Enterprise gave Luverne its first loss of the season with a 66-62 over time win.

Andalusia’s Bulldogs fell to Brantley 55-49 to end the second night of the tournament.

Enterprise will play Brantley at 7:30 tonight for the tournament championship, and AHS will play Luverne for third or fourth place in the consolation game at 6 tonight. Opp will play Elba at 4:30 today in the loser’s bracket championship.

OHS head boys basketball coach Ronnie Sansom credited his team’s win with its amount of focus it displayed on the bus on the ride over to AHS.

“They were much more focused,” Sansom said. “I think that’s why we came out stronger than we have been the last couple of games when we wait until half time to start playing.”

The Bobcats trailed 4-0 at the start of the game, but quickly tied it up on a jumper from Zyki Wade.

OHS went on a short 4-0 run to lead 8-4 on a put back by Derek Savage, and after Florala’s Colt Jackson got a jumper, the Bobcats nailed a 3-pointer courtesy of Tyler Mauer to lead 11-6.

Opp’s big man down inside Trent Finedore found Dane Buckelew for an easy bucket to cut the Bobcats’ lead to 13-6 at the end of the first period.

After a jumper by Erik Vega to start the second half, Buckelew drained four points and Tyler Ferguson two points to give the Bobcats a 40-14 lead.

Hunter Oswald made the back-end of a pair of free throws, and both teams went back and forth on both ends and after a Finedore lay up, the Bobcats led 46-19.

Jonathan Burleson drained a 3-pointer, and the Wildcats trailed 48-22 at the end of the third period.

Florala managed to put together 25 points compared to Opp’s 18 in the fourth period.

Opp took a 62-42 lead off of a pair of free throws from Wade at the tail end of the fourth period.

The Wildcats still had a lot of fight in them as Oswald got a put back to cut the game to 65-44 and Vega got a 3-pointer to give his team its final points of the night.

“We finally got kids playing four quarters,” Sansom said. “We did better on offense, which helped our defense. Our confidence got better. We got better play off the bench. It was all-around a good win.”

Ferguson sealed the win for Opp on the back end of a free throw with less than 3 seconds left in the game.

Ferguson and Mauer had 14 points each, and Buckelew chipped in 10 points.

“It was 32-32,” Allison said about the scoring. “I was proud of the boys of the way we played. We got our inside involved more (Friday night) on the floor. Colt and Hunter both played real well.”

Burleson led the Wildcats with 13 points; and Jackson and Oswald had nine points each.

At the end of regulation, the score was tied 53-53, and Luverne got on board in over time off of a technical foul by EHS.

Wesley Person Jr. hit the back-end of a free-throw, and DeAnthony Rutledge made one free throw to give the Tigers a 55-53 lead.

The Wildcats tied the game up when Robert Washington made a pair of free throws.

Person took back the lead on a drive for a lay up, and Washington tied the game up again with another pair of free throws.

With 2:10 on the clock, Enterprise’s Rhett Harrelson hit a 3-pointer to give the Wildcats a 60-57 advantage.

Later in extra time, Washington Found Nick Forti for an easy lay up to take a 62-58 lead.

Harrelson then made a jumper to give EHS a 64-60 lead.

After a missed pair of free shots from Luverne’s Quin Lee, Tigers’ guard Preston Sankey got a steal and put the game back to two points with 34.3 left.

LHS took a time out to think things through.

Washington sealed the win with a drive up the middle.

Washington led the Wildcats with 26 points, and Harrelson had 20 points.

Rutledge had 14 points, and Lee had 11 points for Luverne. 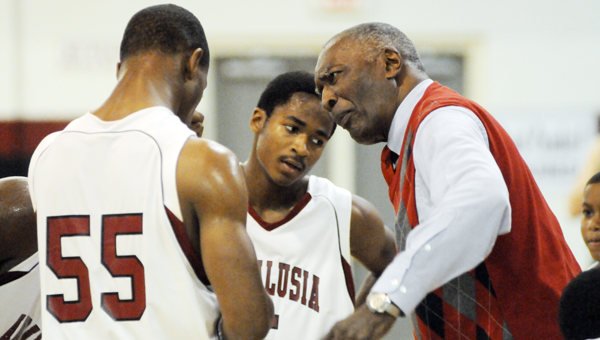 Brantley took away Andalusia’s reliable inside game to come away with the 55-49 win.

“We’re not going to quit,” AHS head boys basketball coach Richard Robertson said. “We’re going to keep on going. We’re going to see if we can get a little better.”

Joe Flowers, who led AHS with 20 points, was 8-of-10 from the perimeter in the loss to BHS.

Andalusia took a 5-0 lead early in the first period after Flowers’ first 3-pointer, and led 7-4 after Brantley’s Chester Person drove the ball up the paint for two points.

Brantley went on a 4-0 run to start the second, but Andalusia held the lead until late.

With 1:00 on the clock, Brantley trailed 22-20, and Terence Bogen hit a lay up to tie the game with 9 seconds left in the half.

Flowers hit another tres to give Andalusia a 25-22 lead at the break.

Andalusia (7-4) and Brantley traded leads throughout the third period, but BHS led 38-37 going into the fourth period.

AHS did not take the lead the entire fourth period, where it remained close until the 2:52 mark, when BHS took a 47-43 lead.

Flowers then hit a 3-pointer to cut the game back to one, but Person answered with a pass to Taylor Driggers for an easy bucket.

“Give credit to Brantley for doing a good job,” Robertson said. “We didn’t play well, and they had something to do with it. We’re not hitting on all cylinders, and we’re just going to have to work harder and harder (to get better).”

Jacard Townsend had 11 points and eight rebounds for AHS.

Person led Brantley with 13 points, and Bogen chipped in 12 points.