Miss Carrie Elizabeth Turner became the bride of Clay Hampton Thomasson in a late afternoon ceremony at the Cedar Grove Church of Christ in Andalusia, on Sat., Sept. 24., in the presence of the couple¹s parents, family and friends.

Lee R. Jamieson, friend of the groom and minister for the Central Church of Christ in Tuscaloosa, Ala., officiated at the double-ring rites. 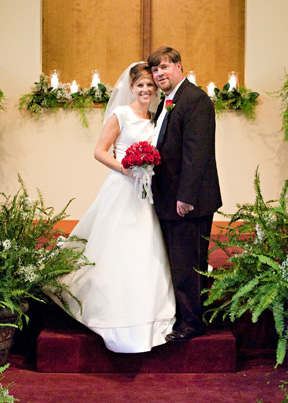 Music for the occasion was pre-recorded from the compositions of David Nevue, a contemporary pianist, and mixed with the bride’s personal favorite selections of Surely the Presence, Hymne, and Canon in D. After the seating of the mothers, Mr. Donald Knox led the assembly in a cappella singing of “Alleluia,” a favorite hymn of the couple.

Before entering the ceremony, the bride read from the familiar scripture, Ruth 1:16-17, “Urge me not to leave you or to turn back from you. Where you go, I will go, and where you stay, I will stay. Your people will be my people and your God, my God. Where you die, I will die, and there I will be buried. May the Lord deal with me, be it ever so severely, if anything but death separates you and me.”

Vows were exchanged before an elaborately decorated altar of ferns and Baby’s Breath flowers. Centering the altar was a bank of tall white tapers in hurricane lanterns interspersed with polished ivy and garden greenery. Tall pedestal arrangements of ferns accented by Baby’s Breath completed the altar decorations. Pews were accented with dainty metal baskets filled with fern fronds and satin streamers.

The bridesmaids were gowned alike in flowing black taffeta skirts with an attached ivory lace bodice. Each of the maids carried a bouquet of American red roses, tied with small satin streamers. Their only jewelry was a strand of pearls, a gift from the bride.

The bride chose a formal wedding gown of bridal ivory satin. The floor length A-line skirt fell from an empire bodice of satin, trimmed with a band of ecru polished satin joined in the front by a tiny, jeweled accent. A second band of polished satin near the hem of the skirt extended into a modified sweeping train. The bodice of the dress featured a round neckline, extending into small, cap sleeves. Her veil of oyster silk illusion was trimmed with a satin band identical to those of the dress. The veil was enhanced with tiny seed pearls. She carried an American red rose bouquet matching those of the bridesmaids. A borrowed silver accented bracelet from Ressie Gray and borrowed silver chandelier earrings from a friend, Mrs. Amanda McCurley Wise, completed her attire with something old, something borrowed.

Mrs. Carolyn Holloway Turner, mother of the bride, selected for her daughter’s wedding a tea-length tiered gown of mocha-colored taffeta topped with a matching bolero jacket. Her accessories were in the same color. She carried a “tussie-mussie” of American red sweetheart roses, matching those of the wedding party. She was escorted by the bride’s long-time dear friend, Dr. Christopher Jerrod Lewis.

The maternal grandmother of the bride, Mrs. Florence Holloway, wore one of the bride’s chosen colors, red, for the occasion. Her wedding suit was accented with a corsage of red sweetheart roses trimmed with dainty white ribbon streamers.

Immediately following the ceremony, the minister announced the new couple, Mr. and Mrs. Clay Thomasson. The couple exited the auditorium to the strains of “I Do, I Do,” by vintage group artists, “Abba.”

The wedding guests were then invited to a reception at the Power Plant Farmer’s Market in downtown Andalusia.

The new couple, Mr. and Mrs. Clay Thomasson, entertained their wedding guests with a reception in the Power Plant Farmer’s Market. Wedding attendees were greeted upon entrance to the Market to the strains of beautiful nostalgic love songs played by Jeremy McMillian, keyboard artist. Overhead twinkling holiday lights gave the appearance of subtle candle lighting.

The bride’s table was covered with a floor-length ivory cloth overlaid with lace. Highlighted near the front of the table was the three-tiered wedding cake lavished with ivory butter-cream icing and decorated with ebony string swirls and dots. Red roses adorned the top of the cake. Serving the confection was Ms. Charity Welcher, friend of the Turner family.

Across from the bride’s table was the groom’s cake served by his sister-in-law, Mrs. Heather Thomasson. The red velvet cake, a favorite of the groom, was served from three individual tiers, which were arranged in a pattern similar to the brides’s.

Mrs. Thomasson was assisted by her sons, Tyler and Peyton Thomasson, who are nephews to the groom.

The bride and groom delighted their friends and relatives by moving among the crowd of well-wishers and visiting with each one. The market was large enough for a “spill-over” of wedding guests onto the covered sidewalks outside where guests enjoyed lingering and chatting with old friends.

The bride and groom left the reception for their honeymoon in Florida. Following the wedding trip, the couple is at home in Andalusia, where the bride continues her job with the Covington County Board of Education. The groom is employed as superintendent with Hoar Construction Company, headquartered in Birmingham.

Mr. and Mrs. Curtis Thomasson entertained at a colorful after-rehearsal dinner in the fellowship hall of the Cedar Grove Church of Christ in honor of their son, Clay Hampton Thomasson, and his charming bride-elect, Carrie Elizabeth Turner, on Friday evening, Sept. 23.

Mr. Curtis Thomasson welcomed the guests and invited them to sit at round banquet tables covered with sage green floor-length table cloths adorned with gold-colored swatches of silken materials and deep red fall flowers. Each of the tables held peppermints and small figurines, which were favors to the guests. The bride and the groom sat at a T-shaped banquet table highlighted with red crystal candleholders containing large candles, while the entire table was graced with smaller tea lights.

Mrs. Marjorie Thomasson, mother of the groom, regaled the audience with her role of an “Old Lady Comes to the Wedding.” She spoke of mishaps and difficulties that brought a sense of humor to weddings in which she had served as wedding director. Mrs. Thomasson then sang special songs for each of the bridal couple.

Christy Thomasson, sister to the groom, presented a special remembrance of her brother, Clay, by describing changes brought about in the family. She recounted events from his birth, growing up, going off to college and then entering the work world. She concluded with an acknowledgement of his beginning a new life as husband to the bride, which was touching to all in attendance.

The bride’s close friend, Ressie Gray, gave similar remarks of love and affection for Carrie and for their friendship through the years. Those comments were continued by her sister, Amy Turner, who described special childhood memories and hopes for the couple’s future. Both concluded in sweet tears followed by a charming and droll rendition from the bride’s long-time dear friend, Rod Lewis, as he recanted lifetime recollections and mishaps of both the bride and himself.

The entertainment concluded with a special video made of the couple in their early childhood, elementary school, high school, and of course, recent events of having met, dated, and planned for marriage.

Lee Jamison, minister for the Central Church of Christ in Tuscaloosa, closed the program with a devotion. He reminded the couple that a wedding joins a couple for life, and their trust in God will sustain that relationship.

How to get perfect pictures

Making the season bright is fantastic idea behind those wishing to spread holiday cheer with homemade Christmas cards, but it’s... read more