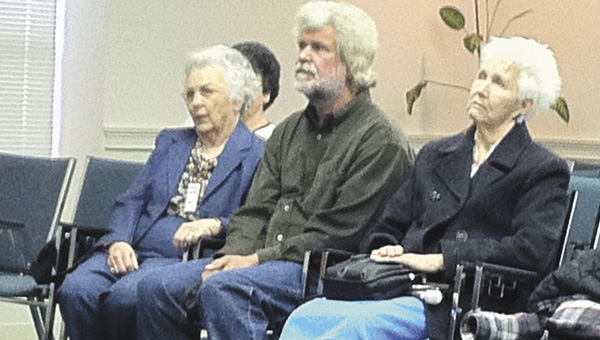 Nina Keenam, Dirk Price and Margaret Gross were among the staunch supporters of CATS in attendance at Monday’s commission meeting.

Each of Covington County’s commissioners said Monday they’d like to find a way to keep the Covington Area Transit System, CATS, operating at its current levels.

Commissioners expressed their support during a public hearing scheduled after it was announced that a nearly $36,000 funding deficit could mean drastic changes for the transit system, including a reduction in services or an increase in fares.

The funding deficit came after CATS lost its contract with the Covington County School System to provide transportation for handicapped students.

And some of those passengers and clients expressed their support for the system Monday.

Faye Bryant, who works at Andalusia Manor, said the nursing home has relied upon CATS for years.

“We rely on them to transport residents to doctors appointments or to the hospital for tests,” she said. “The rescue squads can’t be reimbursed for some of these trips, and there is a liability issue if we transport patients in our personal vehicles,” she said.

Andalusia Manor also relies upon the service to provide transportation for residents’ group trips, she said.

“They participate in things like the Covington County Fair because of this service,” she said. “It would be a great loss if it went away.”

Margaret Gross who is vision-impaired and relies upon CATS for transportation, also pointed out that the service transports many people to kidney dialysis clinics.

“These patients are in a life and death situation,” she said. “This has to be funded.”

Edson told commissioners, “We need help, and appreciate anything you could do for us.”

The agency provides transportation to all areas of the county, and can pick up passengers at their homes.

Commission Chairman Lynn Sasser said the commission likely will address whether or not it can provide additional funding to the agency at its Jan. 9 meeting.

In unrelated business, the commission:

• Approved a resolution extending the employment of Albritton, Clifton and Moody as county attorney for three years. Julie Moody does most of the county’s legal work.

Robbyn Brooks, Troy Messenger   A white male and white female are being held by police after lawmen responded to... read more