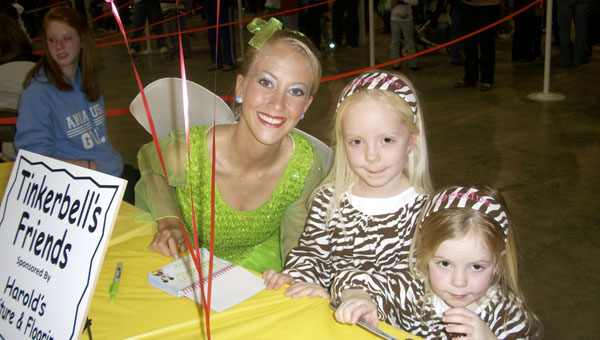 Tinkerbell is shown with sisters at a previous Meredith’s Miracles Cookies with Characters event. File photo

Do you aspire to be Bird Bird, Dora, Tinkerbell or Spiderman?

Then try out to be one of the many characters in Meredith’s Miracles “Cookies with Characters” event, organizer Janna McGlamory said.

“We need about 80 people for this year’s event,” she said. “We have more than 45 costumed characters that we will feature.”

Auditions are open for those in the eighth grade and up and will be held Jan. 5 at 5 p.m. at the First Baptist Church’s fellowship hall.

“We’re looking for energetic people,” McGlamory said. “There are several characters who are in full costume, and there are some that require the actors or actresses to look the part.”

While costumes will be provided the day of the show, organizers said it helps for character hopefuls to come to auditions “in character” with hair and makeup.

Among the costumes are Dora, Big Bird, Mario and Luigi, Beauty and the Beast, Hello Kitty, Rapunzel, Barbie, Tinkerbell and friends, and many more.

This is the sixth year for the event, which will be held Sat., Feb. 25, at 2 p.m. at the Kiwanis Community Center.

Meredith’s Miracles is a non-profit foundation named in honor of Meredith McGlamory, who passed away from a form of childhood cancer in 2003. The charity assists parents who have to leave the area to get specialty medical care for their children. Meredith’s Miracles helps with non-medical related expenses, such as gas, lodging and food, for families within a 60-mile radius of Andalusia.