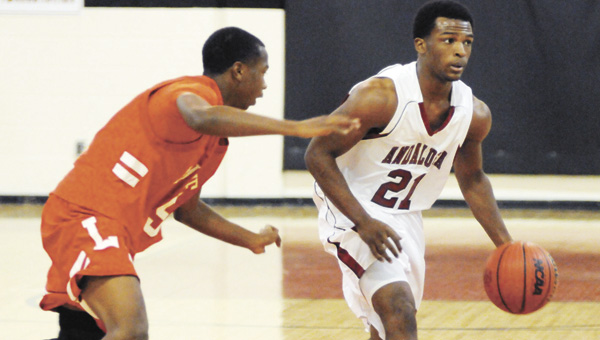 Rhett Harrelson had 22 points, and added four rebounds to help the Wildcats in the win.

A much-improved eighth-ranked Andalusia basketball team only allowed Luverne to hold the lead twice — all in the first period — as the Bulldogs battled for the third place finish at their annual invitational tournament.

AHS head boys basketball coach Richard Robertson said he hates to get on to the team about playing hard, but it had to be done.

“We came into practice (Saturday) and worked on what we wanted to and they came out there and did it,” Robertson said. “Tonight, we played from in front and that made it much easier to do.”

AHS led 18-10 at the end of the first period, and 34-21 at half time. The Bulldogs were ahead 47-32 going into the fourth period, where they faced some adversity in the last two minutes of the game.

AHS utilized its well-played inside game and solid defense once again to beat the Tigers on Saturday night.

The teams were neck and neck until AHS pulled away late in the opening period on a Jacard Townsend put back, and then on a pass from Townsend to Lakelyus “Fathead” Adams to end a 4-0 run to put their team ahead, 13-8.

Townsend made another basket on a steal, which garnered another run by Andalusia.

Luverne’s Quin Lee got a jumper to go at the end of the first period.

Whether it was through a pass on the inside or drive up the middle, the Bulldogs dominated Luverne on the offensive side of the ball.

Defensively, AHS was led by Townsend, who had 13 rebounds in addition to his 18 points, for a double-double.

Andalusia (8-4) led 27-17 at the mid-point of the second period on another pass from Townsend to Adams.

Joe Flowers also helped the Bulldogs’ offense, finding Townsend in the paint for easy buckets or making drives himself.

Flowers then found himself on a 1-and-1 situation and drained the first free shot. His second missed, but Townsend got the put back and Andalusia led 30-17.

DeAnthony Rutledge cut the game back to 13 points on a jumper for Luverne.

Flowers then nailed a jump shot, and Luverne’s Wesley Person Jr. got a jumper to put the game back at six points to end a Tigers 4-0 run.

Jalen Cross then hit a 3-pointer at the buzzer to give AHS a 47-32 lead going into the fourth period.

LHS made things interesting for the Bulldogs, as the Tigers pulled to a 58-53 deficit late in the fourth on a Quindarius Thagard shot.

Luverne took a time out, and Thagard answered the breather with a jump shot to cut Andalusia’s lead to five at 60-55.

Adams helped seal the win when he drove down the court and made a lay up while he was fouled for a possible 3-point play to give AHS a 62-55 lead.

Sam Byrd made a lay up, and Thagard got a 3-pointer down before the final buzzer.

Adams led the Bulldogs with 22 points; and Flowers added 10 points.

Andalusia will travel to play Georgiana today. The B-team tips off at 4:30 p.m.

Elba’s Jake Carnley led the Tigers with 28 points, and Cobe Goosby added 12 points in the win.

EHS led 17-8 at the end of the first period, where Opp was held to three points in the first four minutes, 39 seconds.

The Bobcats didn’t have an answer for Carnley and Goosby throughout the contest.

“We didn’t play real well on defense,” OHS head boys basketball coach Ronnie Sansom said. “We didn’t play with as much intensity as we had (Friday). We couldn’t score in the paint, from the paint, outside the paint and from the free-throw line.

“You’re not going to make many shots shooting like that,” he said.

Goosby nailed lay ups on drives to the paint, while Carnley drained 3-pointers on the perimeter.

Elba led 20-8 at the start of the second period, and Opp scored only six points to tail 32-14 at the break.

The two teams will match up against today.