1A, 2A All-County team named

Pleasant Home’s historical run in the 2011 Class 1A state playoffs highlight the Andalusia Star-News Class 1A-2A All-County football team. The Eagles finished the season 8-4 overall, and 4-2 in Class 1A, Region 2. This season was the first for the Eagles to make an appearance in the second round of the playoffs, where they lost to state runner-up Linden. Pleasant Home faced some late-game adversity in the first round of the playoffs against St. Jude at Montgomery Catholic High School, but a run up the middle for a two-point conversion gave the Eagles a 15-14 win and solidified a second-round home playoff game the next week. 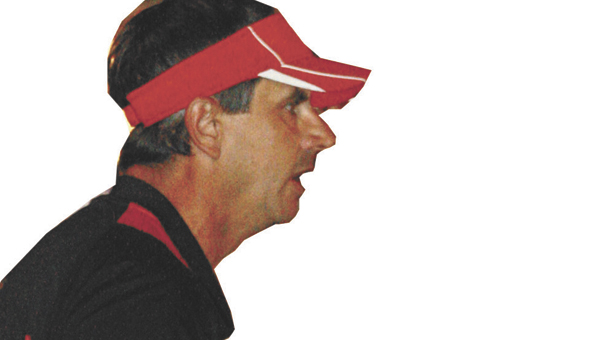 Douglas finished his first season at the helm of the Eagles, and with the help of his assistant coaches, led PHS to a second-round playoffs berth.

“It’s a great honor especially for your peers to nominate you. That’s even more special,” Douglas said about becoming CoY. “As far as how we were able to do it, I had some guys helping me at Pleasant Home. We had a good group of seniors to help us out, too. The kids really bought into what we were trying to do.”

The Eagles won enough region games this season to earn a berth in the playoffs, as the No. 3 seed.

It wasn’t until after the Zion Chapel game, where the Eagles lost 43-21, did Douglas say was his most special moment of the season.

Douglas said the special moment came after the ZCHS game because the kids “matured.”

“We really had to find ourselves after the Zion Chapel game,” he said. “We had to regroup and throw out some things. It was a lot of pressure on the kids and coaches.

“But, the kids stuck by us,” he said. “We put them through the ringer. They really stuck by us and really matured.”

After that loss, the Eagles went on to win four straight games — three of which were 14-13 victories.

Douglas said the success on the field this season goes back to the kids in the uniforms.

“It was again, just the kids believing in what we were trying to do,” Douglas said. “It always goes back to them. They bought into what we were having to try to do.

“A lot of it was just hard work — strictly getting them to work and they did,” he said. 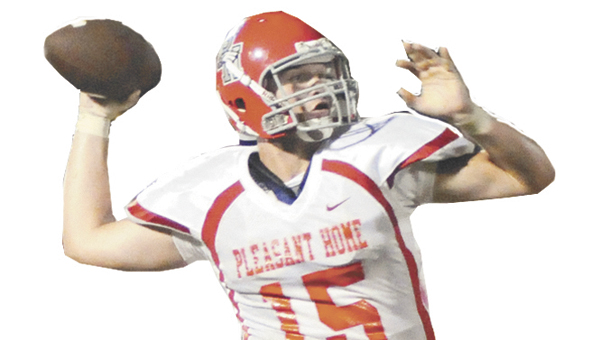 Gunter finished the season with 515 passing yards and six touchdowns in the air. He had 395 yards on 96 carries and five touchdowns on the ground and five interceptions.

Without the offensive line, Gunter said he wouldn’t have had the success he racked up this season.

“Obviously, it starts out with the offensive line,” Gunter said. “Austin Chesser, ‘Big’ Josh (O’Neal), Troy Greathouse, Evan Yates. Carl Whitehurst stepped in at the end of the year.

“I love them like brothers,” he said. “They took me in as one of their own.”

Gunter said his most memorable moment came when he scored the two-point conversion against St. Jude in the playoffs.

“I remember Ty (Bass) looking back at me, and he told me to ‘do this one for us. We’re going to block as hard as we can.'”

A big key to Gunter’s success this season was the fact that the coaching staff at PHS gave him a chance to lead the team, he said.

“I never expected them to take me in like they did,” Gunter said. “It really is a ‘pleasant home.’”

The runner-up Offensive Player of the Year is Desmond Smiley of Florala. 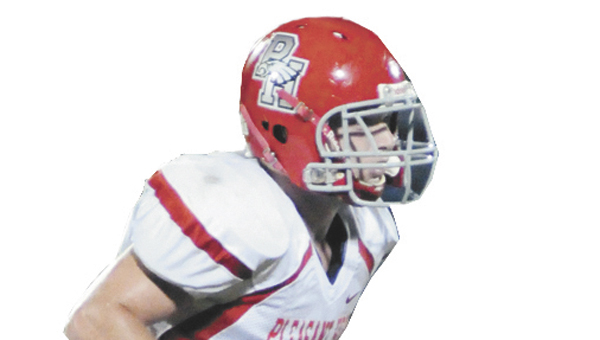 Taylor had 55 tackles for the Eagles this season.

His best game was against Kinston, where Taylor racked up 12 tackles against the Bulldogs.

When asked what his most memorable moment was this season, Taylor said it was a toss up.

Taylor said in the Samson game, the team had to play its best on defense against a fast Tigers team.

“They were really, really fast,” he said. “We stepped up on defense and got turnovers. It was my favorite game out of al of them.”

Taylor said he hopes to be able to play at Huntingdon College next fall.

The runner-up Defensive Player of the Year is Colt Jackson of Florala.

On the offensive side of the ball, Pleasant Home makes up five of the 11 slots on the team.

Pleasant Home’s Gabe Gunter was selected as the quarterback. He had 515 passing yards and six touchdowns in the air. He had 395 yards on 96 carries and five touchdowns on the ground, and five interceptions.

Florala’s Desmond Smiley and Pleasant Home’s Jon Cole Chesser were named the two running backs for the team. Smiley had 847 all-purpose yards and scored five touchdowns for the Wildcats this season. Chesser had 585 rushing yards and four touchdowns.

On the receiving side of the ball, Florala’s Colt Jackson was named the tight end. The wide receivers are Florala’s Jonathan Burleson, Red Level’s James Feagin and Pleasant Home’s Hunter Weaver. Weaver had seven receptions for 124 yards and one touchdown; and Burleson had 344 receiving and three touchdowns.

The punter is Pleasant Home’s Kaleb Powell and the kicker is Florala’s John Bess. Powell averaged 40 yards per punt, and Bess was 14-of-16 in extra points this season.